The Napoleon Dwarf cat is a cross between the Munchkin and a cat from the Persian breed group. At 2020, they are on the TICA website as the Minuet cat. This is either an alternative name or a new name. There is a shorthair and longhair registered separately. They must have been dissatisfied with ‘Napoleon’. TICA board of directors decided on the change in 2015. 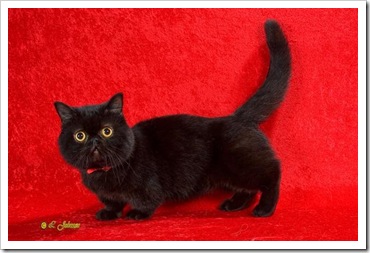 Napoleon Dwarf Cat – These photographs are protected by copyright – please respect it – thank you. They were kindly provided by Terri Harris and show Napoleon cats that are true to type (match the breed standard). Thanks Terri. This is a link to her website: munchkins.com (opens in a new window)

The photograph immediately above and below are both © copyright Helmi Flick – Please respect copyright – thank you. The Napoleon Dwarf Cat, like other genuine dwarf cats is a cross between the Munchkin (the founding dwarf breed) and in this case a cat from the Persian Breed Group of Persians, Himalayan and Exotic Shorthairs. The Munchkin, itself, can be either long or short haired. There is a wide range of coat colors combined with either short or long hair.

As at 2010, the Napoleon was a new breed and at that time was not registered with an association. The breed was still being developed at that time. This can take many years and it could be said that it can go on indefinitely. You can read about the possible health issues of the dwarf cat by clicking on this link. Moving forward to 2018 it appears that the breed did not take off. There was a phase when dwarf cats were popular. This may have faded due to a change in attitude towards breeds based on genetic ‘defects’.

The issues raised in my discussion on genetic issues are applicable for this breed as they are for any of the dwarf cat varieties. Provided this is a pure out-crossing half the litter will be born with the dwarf gene, the remainder are long legged non-standard Napoleons.

Naturally, they are very cute cats. Breeders say that this cat’s temperament is a nice combination of the sweet, laid-back Persian’s temperament and the loving and sociable Munchkin’s demeanour.

A natural question is how does the short legs affect mobility etc. The answer would be as expected in that mobility is compromised but cats are wonderfully athletic animals so the napoleon is pretty athletic. The ideal Napoleon is a strong cat. She has good boning and musculature.

The usual rules regarding combing and the coat apply particularly if she is the long haired variety.

Update 12th May 2010: Margie Gardner is the Napoleon Breed Chairman. She has kindly contacted me and helped to ensure that the cats illustrated on this page show Napoleon cats that are the best representatives of the breed.

The following photographs of Napoleon cats are to type, i.e. of the correct appearance according to the breed standard:

Photographs above from left to right: Chinchilla Napoleon cat, white Napoleon and see the enlargement of Frenchie below. 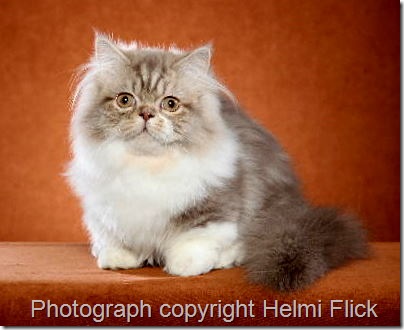 The cat above is called Frenchie and he is a lilac bicolor, photographed against an orange background. Frenchie is a Napoleon dwarf cat that is of the correct appearance.

Of the other cats illustrated on this page, Margie says that the white cat on the strong blue background that is featured twice on this page and which was photographed by Helmi Flick, although a Napoleon cat, is more like a Munchkin. She also makes the point that the black Napoleon cat on the red background at the top of the page is an “extreme” Napoleon. Extreme appearances such that the cat looks like the Exotic Shorthair is not acceptable.

A Napoleon cat should not look like a Persian or Exotic SH “with short legs”…but something more like an old fashioned Persian – with short legs.  The middle picture – of the shaded red – is of a Joe Smith cat and though he too isn’t ideal – he at least fits the general standard whereas the other two do not.

Retrurn from Napoleon Dwarf Cat to the Home page

P.S. This page was first published in about 2010 and has been re-dated. There is still an interest in dwarf cats and the page needs to be ‘brought forward’ in time to make it more visible.