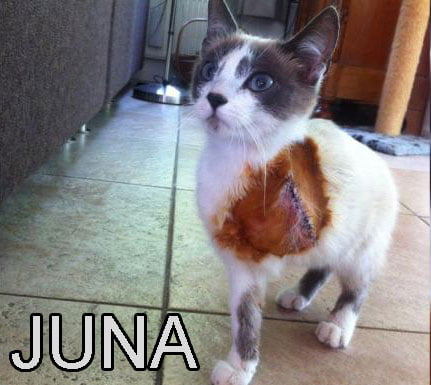 This is a great cat rescue story. A badly injured cat was on the tracks between Utrecht and The Hague, near Gouda (where the cheese comes from?), on 18th May 2015. The driver of a high speed InterCity train saw the cat and stopped the train. I think he must be an eagle-eyed train driver to spot a cat while travelling fast. Perhaps the train was travelling slowly at that point. The conductor took the cat aboard the train.

The train was met at The Hague by an ambulance and the cat taken to the local animal hospital, Dierenkliniek van Alkemadelaan, where, it appears – judging by the photo – her left foreleg was amputated and part of her tail as well. Juna was diagnosed as suffering from concussion and she had a nose injury. The ambulance crew had named the grey and white random bred cat, Juna.

The passengers praised the train driver, whose name we don’t have, on Twitter. I expect the driver has made the newspapers as well. It is great to see all this goodwill, teamwork and cooperation. There is a tremendous amount of goodwill for injured animals. We need to harness it for the betterment of all animals. When people know of about a animal in need they tend to act but a lot of needy animals are out of sight and out of mind.

It is unclear how Juna was injured. My immediate thought is that she was hit by a train and survived but that may be too obvious and simplistic.

The next phase is to find Juna a home. Perhaps the owner will come forward. If not, I am sure there will be a lot of interest from others.