The domestication of the cat is an ongoing process. Domestication still takes place. The domestic cat is still very close to the wild cat in terms of behaviour and its genetic make up because, it is believed, that about 15 or 20 genes separate domestic cats from their wild relatives.

“It is probably the smallest difference there is genetically between a domestic animal and its wild counterpart.”

He goes on to state that it wouldn’t take much to reverse the process, stall it or upset it.

Dr Bradshaw poses the theory that in the United Kingdom, in some places, as many as 99% of male cats are neutered. Obviously neutered cats can’t procreate. The only cats who can procreate are feral cats or stray cats in the process of becoming feral cats, of which there are an estimated 1,000,000. You hardly see them. I never see them! But they are there, unowned tomcats who are whole and healthy. They have not been castrated and as a consequence they desire to procreate and they succeed. By doing so they pass on their less domesticated genetic make up to their offspring. Bit by bit, the theory goes, the domestic cat becomes less domesticated; the evolutionary process of domestication is reversed.

The domestic cat is chosen because he or she is docile and has learned to become sociable and live in human households whereas the feral cat has completely different attributes, namely, a high proficiency in hunting and fighting and staying away from humans.

I can see the argument. It makes sense and is logical but I wonder whether it is a genuine problem or simply a theoretical problem. If Dr Bradshaw is correct it should be a wake up call to more intensive government managed trap-neuter-release (TNR) programmes. 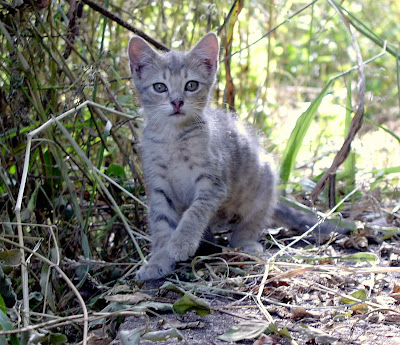 The photo above is of Adele a feral kitten looked after by Bob Tucker in the USA.

On a different note, because there is such a small number of genes which make the difference between wild cats and domestic cats it might not be too hard in theory to breed the perfect cat.

The argument behind this proposition is this. Dr Bradshaw believes that about 7 or 8 genes affect the behaviour of the domestic cat. These are inherited behavioural traits. Behaviour is of course also affected by environmental issues in the early stages of a cat’s life.

Scientists will be able, in the not too distant future, to know what these genes do and thereby identify the friendliest cats genetically.

Once they are able to do that they will be able to selectively breed (or create in a laboratory) for the perfect cat. My immediate thoughts about this not good. I don’t like interfering with nature and you can see how this could all go wrong. In theory, it should go right but humankind has a tendency to abuse this sort of information in furtherance of its own self interests.

Dr Bradshaw is more optimistic. He says that selecting cats genetically for their friendly traits would mean that people would be able to select cats that are more suited to modern urban living. More and more people are living in the urban environment which is less suited to the domestic cat than the country environment. The urban cat needs to be more domesticated in order to be less stressed. There will be many more full-time indoor cats in the UK. People owe it to the domestic cats to ensure that they are suited to modern human living. That’s the argument. What do you think?