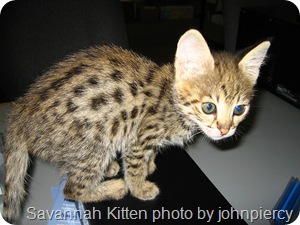 Article posted 15-9-09 (src: Feline Conservation Federation) : The state of California, through its Fish and Game Commission is seeking to introduce new regulations on hybrid cats. The reason is stated as:

“The Fish and Game Code and its implementing regulations do not contain
a general section regulating hybrid plants and animals..”

The timetable is as follows:

California is a state that tends to lead so there may be a knock on effect in surrounding states. The contact person at the Fish and Game Commission is:

It is stated that the proposals would also help in preventing “violators using a hybrid defence and forcing the department to prove that a specific animal is regulated.

The following section is to be added (this is verbatim for accuracy and I presume that this is not a breach of copyright):

(a) Hybrids are the progeny of animals or plants of different species. Provisions of the Fish and Game Code and regulations adopted pursuant thereto regulating, restricting, or relating to a species that has contributed to the lineage of a hybrid shall apply to that hybrid. Unless otherwise provided in these regulations, when two or more provisions regulating a hybrid conflict with each other, the provision that provides the highest level of protection or that allows the most restrictive level of take, possession, size limit, or bag limit will supersede any other conflicting provisions. (comment: as I read this it means that the hybrid is treated in the same way as the most protected species that parented the hybrid – for example, for a Savannah cat this would mean treating the Savannah cat as a Serval in respect of regulations).

(b) Subsection (a) does not apply:
(1) To any duck or goose determined, by the department, to be a hybrid of any domestic species of goose or duck.
(2) When the department determines that the animal or plant is a hybrid of a threatened, endangered, rare, or fully protected species and further determines that the level of protection is not reasonably extended to provisions of the California Environmental Quality Act, California Endangered Species Act, or provisions of these regulations and the Fish and Game Code dealing with threatened, endangered, rare, or fully protected species.
(c) Determinations by the department pursuant to subsection (b) do not have to be based on past or newly initiated studies.

Above are the proposed new California regulations for hybrid cats.

From new California regulations for hybrid cats to Savannah Cats