Nile Chilli Pepper, or Chilli, is a Tawny Abyssinian cat bred by George and Julie Kennedy of Nile Abyssinians in Sydney Australia.

On the 23rd of January 2009, Chilli flew from Sydney to me in Tasmania. As some people may know, Tasmania is a small island located at the bottom of the main land of Australia, and there aren't many Abys here, the last breeder having retired in 2007.

Chilli's not a breeding cat, and he's never been to a show, but he's still a very amazing little boy. Like most pedigree cats these days, Chilli is indoors only, clearly for his safety. I do agree that cats should be indoors only, but can you imagine living cooped up inside for your whole life, while the rest of the outside world passes by? It wouldn't be too great, which is why I chose to train Chilli to the leash!

He's got a lovely Purple harness with a matching leash, on warm days I take him out and he has a ball! Chasing butterflies, stalking birds, eating grass, smelling the smells and seeing the sights! He loves it! He would walk in the sun all day if he could!

Little Chilli is the son of a Norwegian boy who was imported by Nile Abys in 2007, he goes by the name of Ororina's Bjørnstjerne Bjørnson aka Lenny! So, my little Chilli is Australian, yet at the same time he's half Norwegian and part American! (His Great Grandfather on his mother's side was US import!)

So there's just a bit on Nile Chilli Pepper, the Australian, half Norwegian and part American Abyssinian cat, living in Tasmania! 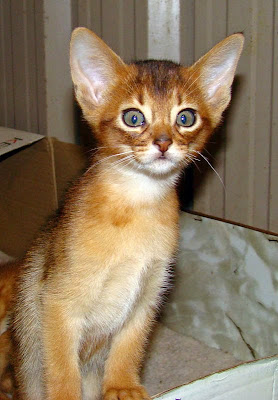 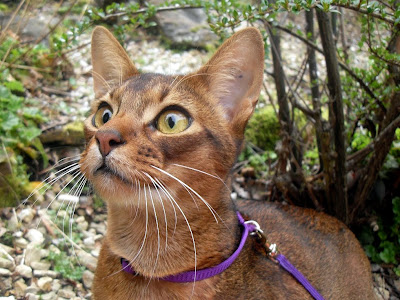 In Memory of Wilson Who Only Wanted a Home