I have a all black kind of dark brown chocolate slightly striped cat. He is playful, not a talker, nor lap cat. I think he is a Black Mau... He is also very aggressive! He has a big nose, big ears. He scratches me a lot.

I found him when he was a kitten about 4 months old, and to me I took one look at him and said, you look like an Egyptain cat. But I wasn't sure.

He was very bony, tall, with long legs, a long tail and some really big ears. The older he got, he grew tall. But he gained weight because I had him neutered. Which I think he hates me for.(HAHA)

His meow is very weird not a normal meow. He also makes a weird noise when he does not fully meow. Only time he meows is when I say the word "EAT-EAT" and he knows its time to eat. Or when he greats me at the front door when I come home.

I find him very extraordinary. He is only nice when he wants to be.....Never had a cat like him before. I'm glad I found him when I did. I found him 2 months after my other cat died. He is about 2 yrs old now. He likes to be left alone at times, which I do not understand.

I thought he would have gotten used to me after 2 years, but I guess not, or that's just his type of cat. (HAHA)

That's my story on Ninja! Here is his picture.

Hi Jessica... thanks very much for sharing your experiences with Ninja.

These are called "melanistic" cats in reference to the pigment in the hairs called melanin. The underlying tabby coat markings can be seem faintly through the black as you describe. Here is a picture of feral Maus, two spotted and one black, on the street in Egypt: 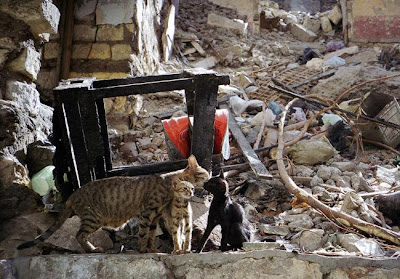 Published under a creative commons license