No Law in China Saying Cats Cannot be Eaten

Cats being shipped to market in a cage on a truck.

Yes, there is no law in China saying cats cannot be eaten. In fact the no law scenario goes further. Animal protection laws are non-existent in China. These statements come from the reports of newspaper agencies in Shanghai, China. So it is agreed, I think, that there is no legislation that protects animals in China.

This probably, in part, originates in the issues of human rights that are currently being raised in China. Where there are infringements of human rights it is unlikely that there will be any animal rights (or protection).

But there are kind hearted people in China who don't like the situation and who cannot stand by and let cat cruelty go on unabated.

And I am talking about that well known Chinese habit of eating the domestic cat. This does not take place throughout China but in an area in the south. Guangzhou is the capital of Guangdong Province in the south of People's Republic of China where some people like eating freshly killed domestic or feral cat.

As I understand it the cat has to be partly killed and then sold. The adrenalin produced in the cat makes the flesh taste better so I have read. That may be untrue but it is certainly true that these cats, which are shipped to this district from outside areas in trucks, are cruelly treated.

The cats are liable to incur injury and sometimes death in highly cramped cages on lorries when being shipped to their destination; a cat and dog market where they are sold for 50 yuan (£5) a time for the dinner table (src:Shanghai Daily)

On more than one occasion rescuers have stopped these trucks and fought a battle with police to confiscate the caged cats and re-home or release them. 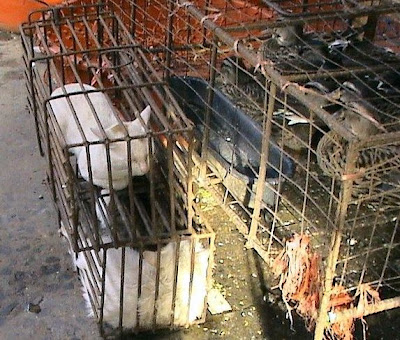 Domestic cat in cage in a market in Asia ready to be slaughtered and eaten - people in Vietnam and other Asian countries also eat domestic cat. Photo: Anna Frodesiak (Wikimedia Commons)

A recent case resulted in the rescue of about 600 cats. The police where unhelpful as false papers were provided by the people who steal and ship the cats proving that they were legally entitled to do so.

The rescuers showed great resolve and lay down in front of the trucks. Eventually after much argument and a number of cat deaths (due to the excessively cramped conditions) the rescuers won. A great and surprising victory.

In an earlier case 300 cats were rescued under similar circumstances, while being shipped to market in Guangdong Province. This time the cats were in a yard.

In this case "animal rights activists" (I dislike this phrase - how about "kind hearted decent people"?) from Shanghai (who I believe to be the same group of people referred to above) rescued the cats, some 20 to each small bamboo cage. They were re-homed by "animal lovers" or released. It would appear that the cats are sometimes stolen from their human companion. These cats are not always feral cats.

Some cats die and some suffer broken bones, which is to be expected. What is interesting is this. The cat rescue groups have to act outside the law as there is no law. It is a kind of free for all - a little bit of anarchy.

The cat dealer fights back and it is a plain fight. This leaves the police in a difficult position as there is little law to apply and enforce.

On this occasion the rescuers retained the cats and the dealer was set free as there is no law in China saying cats cannot be eaten and no law to say a person cannot deal in domestic cats destined for the kitchen.

But isn't there a law that prohibits theft? No doubt there is in China. But I suspect that the domestic cat is not considered a possession by an individual and therefore it cannot be stolen.

In the west a cat is a "chattel" an old fashioned word that means moveable property as opposed to land (real property). It is possessed by us as is a refrigerator.

I must end up with a conclusion. There is the beginnings of change in China in respect of animal welfare. Where there is no law, people can and will take it into their own hands to do justice and right. This should eventually lead to legislation and then enforcement of the legislation and while we wait many more innocent and vulnerable domestic cats will suffer unbearable suffering.

The photo is published under the argument of fair use as this is a non-profit site and it is in the public's interest that this subject matter is discussed in public.