Non-human Persons Should Not Be Declawed

Gradually we, as humans, are seeing animals as non-human persons. Our attitude towards them is being adjusted. We are at the beginning of seeing them as individuals that are intelligent but different. 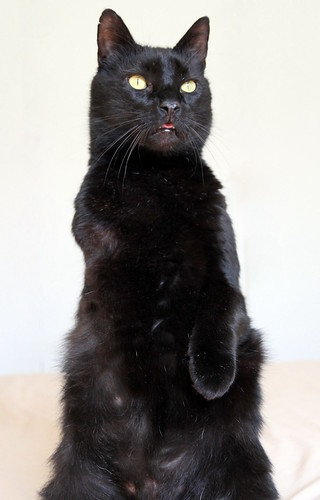 I am an individual. Treat me as such, please.
Photo of Charlie by Michael @ PoC

I am mainly thinking of dolphins in this instance but the concept of relating to animals as non-human persons would have a profoundly positive effect in the fight against declawing cats.

I am essentially back to my previous arguments of our general disconnect from nature and not viewing the domestic cat as a companion animal but as an object over which we have dominion.

The phrase “non-human person” discards the separation between them (animals) and us (humans). I have never felt that separation. I have always thought of my cat companion as one of us. However, most people think differently. The bible supports the difference while Darwins theory of evolution breaks down the barrier.

The dolphin is a non-human person that has a level of intelligence which makes it easy to think of them as individuals that are similar to us but different, so says Chris Butler-Stoudis the chief executive of the Whale and Dolphin Conservation Society.

There is a nice story in the Times today that both gave me the idea for this short post and which also describes the intelligence of the dolphin. An intelligence, incidentally, that many people are still yet to recognise and accept.

Kelly is a captive dolphin who was rewarded with a tasty morsel of food if she grabbed a bit of litter from the pool and brought it to her trainer. She decided the best way to get more morsels was to divide up bits of litter in to several pieces, which she did by tearing them up and bringing one piece at a time to her trainer. Now that is smart.

Science is gradually telling us that the idea of individuality, self-awareness and consciousness are not just human qualities.

Once that gets around and ingrained in people’s consciousness, it will be all but impossible to justify declawing cats.

Currently (Feb 2012) although cat caretakers say that their cat is a family member, many do not really believe it. When push comes to shove, their cat can be disposed of or declawed. This is something no self respecting person could do to a true family member reclassified as a non-human person.