Zep waiting for me outside my door

This story is about a cat who made me see how some people don't realize that cats are sentient creatures and have thoughts and feelings. It happened about two years ago. He was most likely a stray, as a feral would probably not have been as friendly. He would wander into my yard, and I would put a little food out for him. As a result, he would follow me around while I was outside and sit outside my door for a while when I went back in. A friend brought a truck to me that needed repairs, and while I worked on it, this cat hung around and visited. On a few occasions, while I was lying under the truck working, he sat on my chest and watched me. I decided to give him a name, even though he wasn't mine. I called him Zep, after the brand of penetrating oil I was using to remove rusty bolts at the time.

I kept giving him a little food, and he kept coming around. Every time I went inside, it was the same thing... he'd sit outside my door and wait for me to come out. He even followed me to my truck and watched as I drove off. I thought it was strange, until I started to find out how he was treated at other houses he visited.

My neighbor on one side noticed him in my yard and asked if he was mine. I said he wasn't, and was told about how they had to keep chasing him off of their porch with a broom. Then I was told that I should stop feeding him or he would keep hanging around, to which I replied that if he hung around MY yard, he was staying out of theirs. I asked around, and not only could not find where he was from, but that most of the neighbors felt the same way about him... that he was a nuisance.

How much of an inconvenience it must have been for them to find him on their porches trying to stay dry and warm! Not to mention how he made their dogs bark when he came around! What trouble he was! This scared and lonely cat was just trying to survive, and that was a problem for some people. I have no doubt that their actions towards him were the reason for his scared and jittery nature. Sudden movements, even reaching to pet him, and loud noises scared him much more than they would a normal cat.

I built him a little shelter on my lower porch and put some old carpet in it, sprinkled it with catnip, and put a bowl of food inside. It wasn't hard to lure him to it, he followed me everywhere in my yard. He even followed me into my finished basement once. I didn't even notice him go through the door, but Dodge did, and chased him back outside. I didn't see Zep for about two weeks after that. I got a little worried, and missed him greeting me outside and following me around. I was relieved when he came back.

We were back to our routine of him following me around. But it wouldn't last long. How happy the neighbors must have been when their "nuisance" was no longer there to inconvenience them.

After two years, I still sometimes miss him hanging around when I'm working outside. I hear the bushes rustling and by force of habit look as if he were going to be there. But I know he won't be there, he's in a better place now. His fears are gone, and he's not cold, hungry, or lonely anymore. I know this because he's sleeping peacefully in a cat bed on my chest of drawers as I write this (you didn't really think I'd let Zep's story have a sad ending, did you?).

Not long after Dodge scared him away and he came back, I took him in. It was apparently what he had wanted anyway, as he kept sitting by the door wanting to come in. Now, instead of sitting on me or beside me while I work outside, he sits on my lap while I'm on my computer and lays beside me when I sleep. He shows no interest in the outside, doesn't look out of the windows, and won't go near the door. He gets along exceptionally well with my other cats, and they have helped him to become more social and less afraid. He may not be able to talk, but he tells me every day that he is happy when he sits on my lap, purrs, chirps, and head butts my chin. He likes his care free new life, and after the ordeal he had outside, he deserves it.

By popular demand....Here are two more photos of Zep: 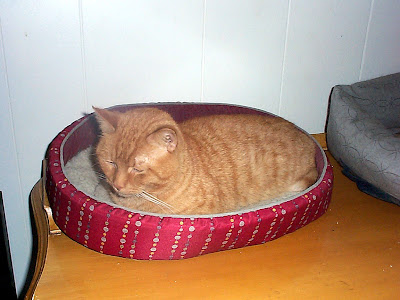 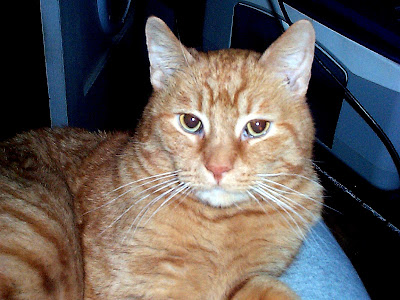 Nuisance or Neglected? to Feral Cats