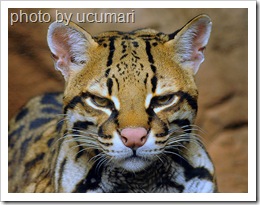 The distribution (at 29-8-09) is shown in a customised map below. It has been created by me from the IUCN Red List of Threatened Species™ (Red List) the most current map. My map would and could be more accurate if the Red List was scaled up. That said the range is probably not known that precisely anyway.

All range maps need constant attention and revision or plain refining and that goes for the distribution map of the ocelot on this page. The original Google map from which the one below is presented is an open collaboration project so anyone can improve it either through reporting sightings (and thereby perhaps extending the range) or by adjustment of the boundaries on the basis of no sightings for a considerable time. The map is here: Ocelot Range 2009 (new window).

If you are unfamiliar with Google My Maps please view the video above, right. I talk more about the range and this cat generally below. Pictures 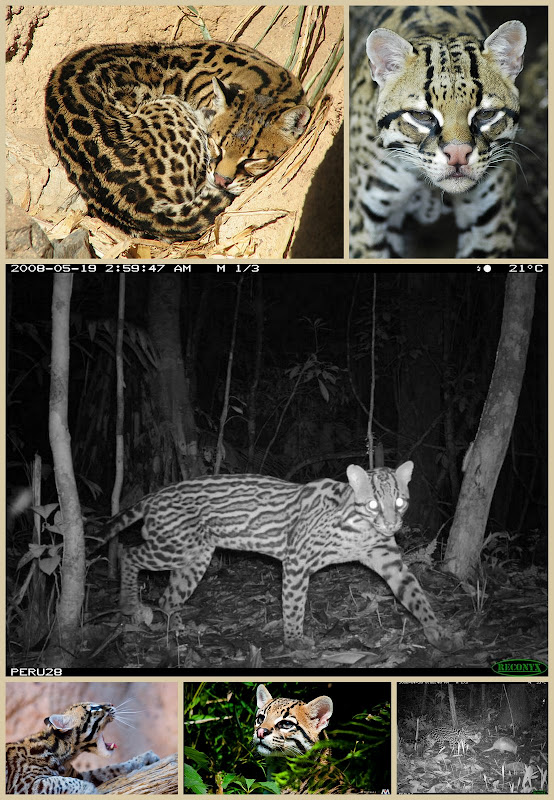 The Sunquists in their book, Wild Cats Of The World, say that there are fossil records of this cat in Florida and Arizona and that it used to be found much further north than its present range, occupying Arkansas and Arizona in the USA. The Sunquists mention that the ocelot has been recorded as occupying Trinidad and Tobago and the island of Margarita (see blue flag on map above). The ocelot shares (symatric with) large parts of its range wth these wildcats:

Note: Big Cat Rescue say that this wildcat can be found in small populations in Texas and possibly Arizona and New Mexico. This seems to be much further north than idicated by the Red List. However, as part of a study in Texas researchers have created a subpopulation there. I won’t say where!

The scientific name is Leopardus pardalis. It looks similar to the margay but is considerably larger and its tail is relatively shorter (the margay is an especially gifted climber and the long tail acts as a balance). It can be hard to compare sizes in pictures (impossible, in fact, as these cats are rarely if ever together in a photo). It has fabulous markings, a gift from nature. They are its worst enemy. It is named after its spots as “ocelot” comes from the latin “cellatus” meaning eyelike spots (Sunquists). This cat has been mercilessly exploited for its fur by us.

Using cat fancy terminology this cat has white spectacles and black mascara producing an extraordinary contrast. These are markings that a cat breeder would die for! The irony is that it is the cat that is doing the dying because of them. It has a full range of markings:

The background colour varies between grey to cream.

Perhaps one positive side effect of this cat’s persecution by us is the urgency with which research was carried out from 1980 onwards. Perhaps this was a result of its diminishing population. People became concerned. Although this cat’s survival is not a concern to the IUCN Red List people. They are found in a wide range of habitats within the range and from sea level to 1,200 metres above sea level. The ocelot lives in areas where there is good cover and plenty of prey (rodents). This wildcat is so sensitive to the need for cover that even when hunting at night but under a full moon it avoids open areas and trails and works in bushy areas. The habitats include:

Two examples of these habitats are below: 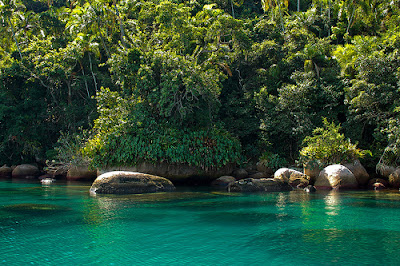 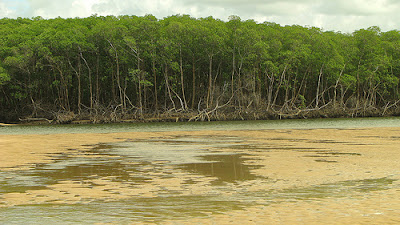 The ocelot is a very good climber but it would seem that most of their prey comes from the ground and not in trees. In other words research indicates that they are not “arboreal” (tree dwellers). Big Cat Rescue disagree with this, it seems. They do rest in trees, however, but also on the ground in well covered areas such as the base of a large tree, a depression in the ground or under leaves. One of the pictures in the collage above shows an ocelot curled up like a snake in a depression in the ground.

This cat is also an excellent swimmer (lots of wild cats are). One male crossed the Iguaçu river 5 times when being tracked: 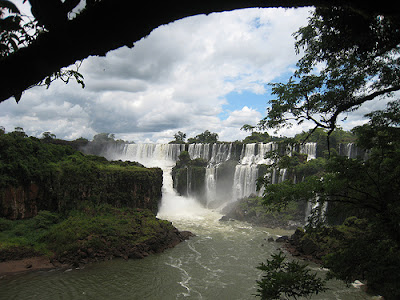 They employ these techniques for between 12 – 14 hours per day (long working day!). They rest in the middle part of the day (from after dawn to late afternoon). However, a high level of stamina is sometimes demonstrated as when a male kept walking for a straight 31 hours when tracked for 34 hours (Sunquists)

Suitable prey usually weighs less than 1 kg (mean weight of mammalian prey is 1.4 kg) (Red List) and would include: 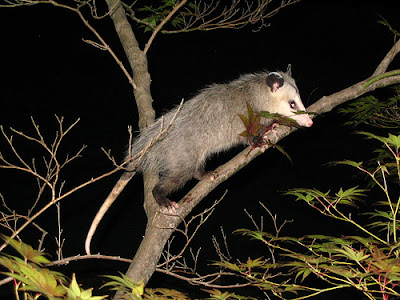 I am immediately drawn to recalling the Big Cat Rescue video in which the presenter said that the odour of the urine sprayed by an ocelot as a form of communication is very pungent, stronger than all other wild cats, perhaps. This is because in the wet rainforests it is rapidly washed away so the starting point has to be strong. Urine is sprayed on bushes, trees etc. Other markers are uncovered feces and this is sometimes done in the same place creating a toilet like quality about the site.

Wild cat home territories follow a similar pattern. It is a male world, the cat world, in some respects. The size of the home range varies from male to female:


The way the ranges overlap or not can be presented like this: 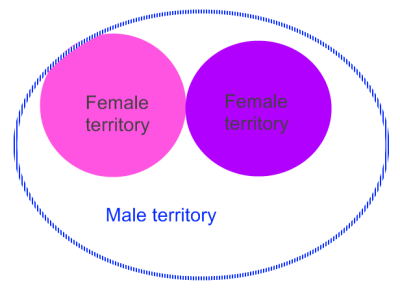 The population densities of the ocelot are (src: Sunquists):


Males and females will occasionally meet notwithstanding that the ocelot is a solitary animal. In fact the rates of ocelots crossing paths is considered high.

Ocelots give birth less frequently than most other wildcats and have smaller litter sizes. There is likely to be a two year interval between births. This is thought to be because of difficulties in finding suitable prey. The timings etc. are best set out in a table (taken from captive ocelot observation):


Dispersal (the highlighted area in the table) from the “natal area” (their mother’s territory) can be hazardous it seems. Studies reveal that a good percentage that go in search of their own territory are killed in various ways. The chart provides some examples (Sunquists). This is just an amlagam of various radio tagged cats to give a feel for what happens on dispersal. 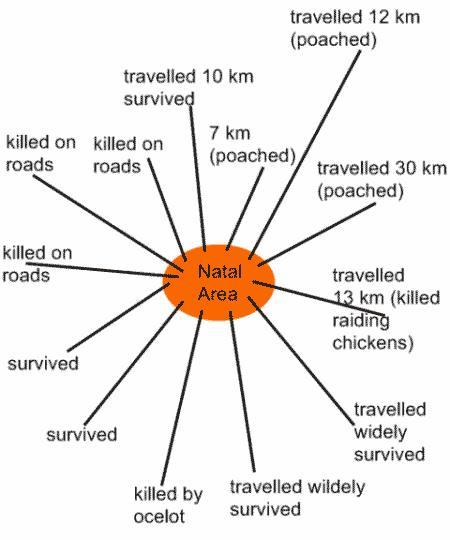 The mortality rate looks high based on these radio tagged surveys. In an ocelot’s lifetime it may give birth to 5 offspring. Of these, on the basis of the high mortality rates on dispersal, only 2 may reproduce (these are not set in concrete figures).

It would seem that the “harvest” (horrible phrase) for pelts did not take this into account (does it ever?).

This species of wildcat is classified as Least Concern (LC). I think, in my naivity perhaps, that all wildcats should not be classified LC as there is a continual threat from habitat loss, poaching and in the case of the ocelot to be turned into a pet. This cat is promoted (at least indirectly) as a good pet in the USA and probably in South America too.

Least Concern (LC) is an IUCN category assigned to species not qualifying for other categories and is used for many common species like humans and pigeons. Why is the ocelot in this category? The IUCN Red List of Threatened Species™ team justify it by saying that this species of wildcat:

This really seems shortsighted to me. The long term prognosis in not good. Habitat loss will continue as will illegal poaching. I believe that the Red List team fail to project far enough into the future based on past experiences.

Threats to survival in the wild include:

From Ocelot to Wild Cat Species