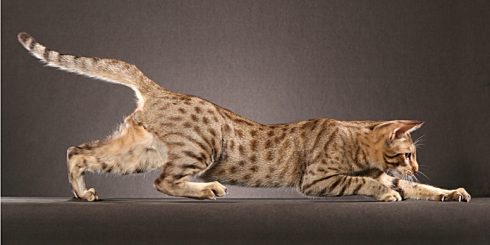 The Ocicat is another cat breed that is quite rare but not in fact as rare as one might think on my assessment (rare cat breeds). The breed, I think, is in the same bracket of exotic (or jungle) cats as the Savannah, Serengeti, Chausie and Toyger in that they satisfy the modern day interest in domestic cats that look like wild cats and have the disposition of a well socialized domestic cat.

The interest in “jungle cats” can extend to wanting to live with them. However, there is no wild blood in this cat and it was not the  intention of the founding cat breeder to produce a “jungle cat” (see below).

There is an underlying purpose in the development of this breed; the hope that it can slow the importation of small/medium sized wild cats to the West. This importation seems to take place primarily in the USA.

Also it would be nice to think that in adopting a cat such as the Ocicat there is a constant reminder of the plight of endangered wildlife generally and wild cats specifically.

The name of the breed comes from the wild ocelot which is similar in appearance and is a combination of the words, “ocelot” and “cat”.  Click on this link to see a picture of the Ocelot and Ocicat on the same page:- Accicat.

The CFA says that the cat is an Agouti spotted cat of moderate type. To use simple non-breeder language “moderate type” means an appearance that we expect of a cat (i.e. not extreme in appearance like the Ultra Persian or Modern Siamese). As for the word “Agouti”, this as you may know refers to the Agouti gene.

The dominant Agouti gene (A) controls the production of melanin (black pigmentation). The combination of this gene and the gene that results in a tabby spotted pattern gives us this coat appearance (see origin as well). I have an extensive article on the tabby cat coat which may be of interest.

This is a relatively new breed from the United States. The creation of this breed was an unforeseen result (a pleasant accident) of an experimental breeding program. Here is a potted history in table form. Due to the accidental nature of the creation of this breed it was called “Accicat” at one time. To add a bit of spice to the discussion there is (I think the breed is current or experimental) an associated cat breed called the Classicat. 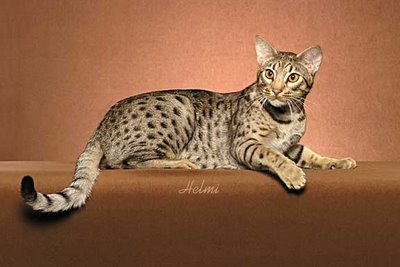 Incorporating three sets of genes from 3 recognizable breeds tends to result in a more robust and healthy cat. The breed is the only example of selective breeding to produce the wild cat look (as opposed to wild cat/domestic cat hybrid).

You can read and study the other “exotic” cats to understand the character and abilities of this cat. The exotics tend to be athletic, intelligent (and therefore more trainable), confident and active. Although this is not a wild/domestic hybrid, which are the most assertive breeds of cat.

This cat is capable of opening doors. Helmi Flick lived with an F1 Chausie who would learn how to open a door by watching and copying. You’ve gotta be careful sometimes with breeds of this type

This breed of cats are muscular and solid with a short haired coat. They have a body shape closer to the solid American Shorthair than the delicate Oriental but it is larger. They are heavier than they look (as is the Tonkinese) because of the boning and muscular body. The breed is described as sociable with humans and other pets so it may not be wise to adopt if you’re out a lot. Their sociability is clearly dependent to a degree on how they are handled when young.

The colouring is tawny or a light brown with dark spots. Other colors include: chocolate, blue, fawn and silver1.

All domestic cats, in my experience, like company, provided they have been adequately socialized. They particularly like the company of a loving and caring human companion, who the cat sees as a cat anyway. 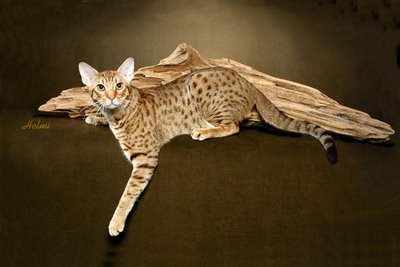 Here is an article by Sue Threapleton an Ocicat, Egyptian Mau and Serengeti breeder who lives with her husband Paul in a small village in East Yorkshire: The Ocicat– Sue provides a good insight into living with an Ocicat.

The kitten photograph in the middle, above, of Ocicat kittens is a photograph that Helmi remembers well. The kittens were brought to her by the cat breeder Barbara Stewart. If you click on the thumbnail you will see that one of the kittens is lying down and looking at the camera through the feet of his sibling. It is a nice touch and makes Helmi smile (me too). And for that reason alone this is a very good photograph.

You can get a longhaired variety due to the recessive gene in the Abyssinian. This breed comes in many colors; there are 96 color/pattern combinations. 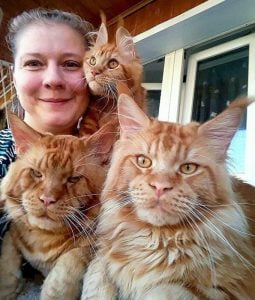