↓
Home→Uncategorized→Old Ugly and Tabby Were Always Together

Old Ugly and Tabby Were Always Together

Back in the early 1980’s I lived behind my mother and would walk down to her house every night to check on her. She was in her 70’s at this time and still able to do things on her own.

Every afternoon mama would put food out for any of the feral cats who needed a good meal. There were two cats who came every night. You could set your clock for them to show up between 5p.m. and 5:30 p.m. every day.

The gray tabby who we named "Tabby" would show up first. Then a few minutes later the most memorable calico I’ve ever met would join Tabby at the food bowl. We named her Old Ugly because mama said she was so ugly she was beautiful. The more I saw her the more beautiful she became. She had the most awesome eyes. The pictures I’ve included here are the only ones ever taken of her.

I always tried to be inside mama’s house when they arrived. Tabby wouldn’t run at the sight of a human but Old Ugly was terrified. In the beginning all I had to do was open the screen door and Ugly would run off from 50 feet away. She was that afraid of me. 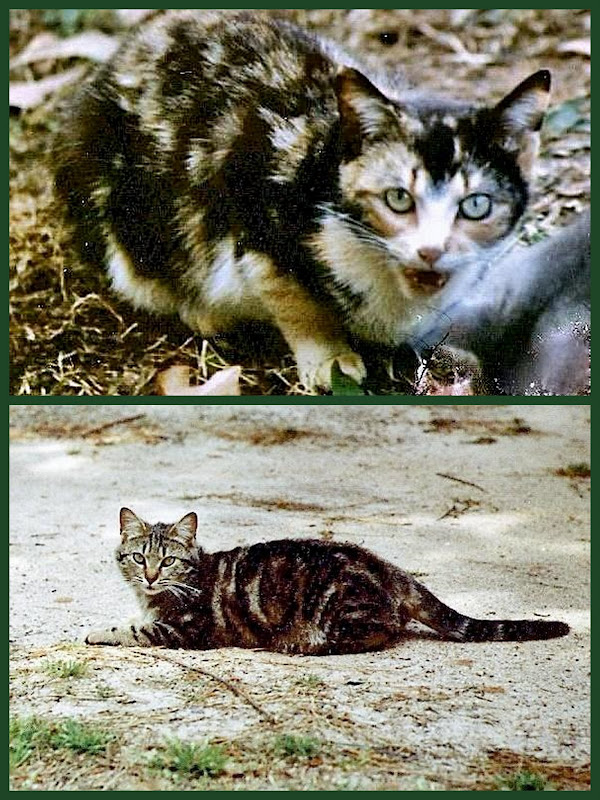 Over time she became a little more tolerant. I still remember the day my mama had her window screen up and was talking on the phone when I left to go home. Tabby and Old Ugly were eating and for once neither of them ran away. I could barely hear mama telling the person on the other end of the phone the cat was following me home. I couldn’t believe it myself.

Eventually I was able to feed the two cats from 10 feet away and watch them eat. Then I moved the food bowl next to my doorsteps and sat on the steps and watched them eat. Every now and then the two would be scared off but they had learned to trust me just a little. Some nights they were brave enough to let me pet them. I considered that a major victory.

One night I was brave enough to pick up Old Ugly and take her inside. Her heart was beating so hard and so fast I returned her to familiar surroundings and never tried to bring her in again. It was just too stressful.

The two continued to come for a couple of years. Then they just stopped. I don’t know if they found better food or if the neighborhood dogs got them. I never saw either of them dead in the road but I could have missed it if they’d been hit on the side road. I like to think I made their lives a little happier.

I don’t put food outside anymore and mama has been gone since 2001. Together we fed a lot of cats over the years. But if a cat comes to my door and needs a bite to eat before continuing on then I will put out a plate of dry food and some water.

Old Ugly and Tabby Were Always Together to Feral Cats