On serval subspecies Wikipedia is wrong (Jan 2012). I’ll explain why I believe that to be the case. If you disagree with me, please leave a comment. But please make a good argument. 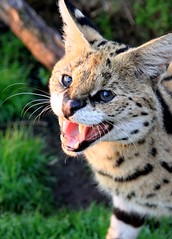 Mammal Species of the World was updated in 2005 and is in its 3rd edition. The Smithsonian National Museum of Natural History refer to the work and say that it is a database of mammalian taxonomy and that the 3rd edition will be updated in the future.

You can search the database on their website, which lists 13 subspecies. If you take an examples of these subspecies you can see that they were created a long time ago. For example, the author’s name for Leptailurus serval kempi was Wroughton, 1910.

These are outdated ideas. At that time many scientists misassigned subspecies status to cats of one species based on appearance such as coat pattern, anatomy and location of the cat. Today genetic analysis has reassessed this taxonomic classification and come up with far fewer subspecies or none at all (monotypic taxon).

In  fairness, Wikipedia do say that “a few [authorities] have even treated the serval as monotypic” (a single species). But this implies that they are probably wrong. I am not asking Wikipedia to provide an opinion. I am saying that they are misleading and should provide a more definitive and modern appraisal of serval subspecies.

Two reference works that I use:

both make no reference to subspecies.

It seems almost certain that Mammal Species of the World is now outdated referring as it does to outdated assessments of the classification of this species of wildcat. Wikipedia are overrelying on this reference work.

Wikipedia should do more work on this topic on their page on the serval, as it currently misleads.

From on serval subspecies wikipedia is wrong to home page.