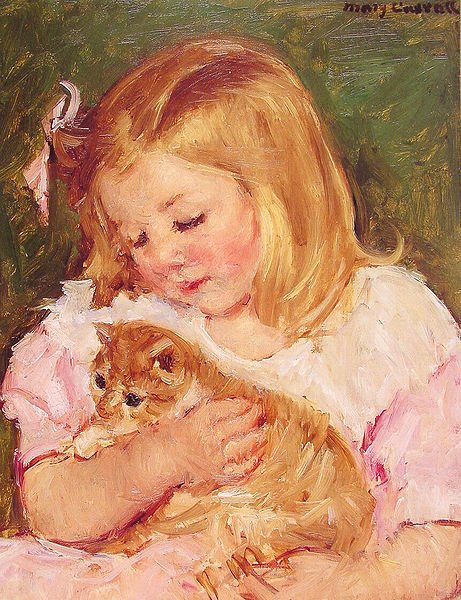 The belief that a domestic cat could suck the breath out of a baby probably stemmed from a combination of factors: 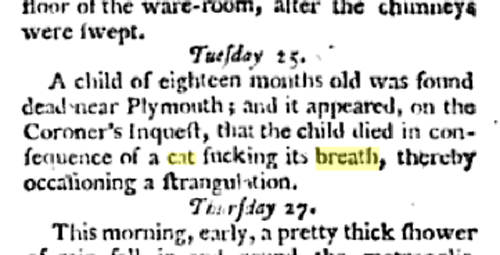 The exact date was Tuesday 15th 1791. Note that “s” was written as the modern day “f” creating a rude word 😉 It is strange that the coroner referred to “strangulation”. Sucking breath is not strangulation but it is closer to suffocation.

In short, superstition evolved into “fact”. The sad fact, today, is that a sizable percentage of women relinquish their beloved and cherished cat, or don’t adopt a cat, because they have a new baby in the house or are pregnant. The number of cat relinquishments because of the perceived incompatibility of a cat with a baby are similar in number to other major reasons such as the cat’s owner has personal problems or euthanasia of the cat due to serious illness¹.

It is surprising how many people believe that a cat can kill a baby. Nowadays, the reason is probably more a fear of a cat lying on a child and suffocating the child because the cat is attracted to the warmth. Surely this possibility can be managed and prevented?

This is a great shame because a cat’s presence can be very beneficial to a baby who becomes a child. Not only is close contact with a companion animal good for a child’s development in understanding animals, some doctors say exposure at a young age to a cat can strengthen a child’s immune system.

The far better course of action for a pregnant mother is to set in motion a regime in the home on the new arrival of never leaving the child unattended with a cat that is allowed to roam throughout the home or outside and to make sure access by the cat from the outside to the child’s room is barred. This regime could be in place until the child is about 6 years old. It is a simple case of sensible supervision and then education of the child in how to handle and interact with a cat.

THIS PAGE HAS BEEN BUMPED UP IN TIME AND WAS ORIGINALLY POSTED IN 2013.