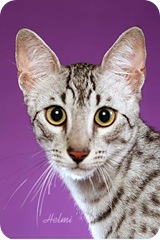 The origin of the word meow is not discussed on the internet, it seems to me. Or at least I can’t find it. Perhaps there are no origins to this word as it is simply meant to sound like the sound the cat makes when he or she speaks. In other words, it is meant to be a word that mimics the cat’s cry (onomatopoeic – where the word sounds like the thing it describes). It could be as simple as that. But I don’t see it quite that way because the “m” in meow is just a bit odd. When cats meow they either don’t actually start by making the “m” sound or it is a very silent “m”. It seems that we put the “m” in meow or hardened it and the bit that follows is the sound of the cat calling or speaking. Click on this to hear a typical cat call: Cat meowing.

The letter “M” is firmly planted on the forehead of the most commonly occurring type of cat in the world the tabby cat (new window). The Egyptians were possibly the first people who domesticated the cat on a wide scale. The Egyptian Mau is a spotted tabby cat. It is claimed to be the only naturally occurring spotted cat. This though is an odd claim as there are many wild cats with spots and all of them occur naturally. Perhaps it is the only naturally occurring domestic cat.

Today, the Egyptian Mau is both a glamorous show cat and a persecuted feral cat that still inhabits Egypt. it is thought to be the descendent of the African Wild Cat. Of course it looks fancier and more refined in show cat form but the similarity is still apparent.

We have then a cat with the tabby “M” on the forehead living in Egypt at the time the cat was worshipped and thoroughly domesticated, thousands of years before Christ. The current word for cat in Egypt is “Mau” and the word when spoken sounds like the meow the cat makes.

The cat in ancient Egypt, or miw (to see – based on the cat’s eyes that shine in the dark – see Why Do Cats Eyes Glow in the Dark), was a sacred and respected animal. (src: – link broken). Apparently from 1450 BC wild cats and domestic cats were called Miu, or Mitt (female), meaning she who mews. (src: Link broken Oct 2012). The word for cat was also the word for meow in China and Egypt. This might still be the case, I am not sure.

Well, all these words start with the letter “M”, the sign on the forehead of the most common type of cat, the tabby. And as I said the actual meow does not have an “m” in it or it is very silent. I may be wrong but the origin of the word meow is a development of the onomatopoeic word that mimics the cat’s voice, which was hardened up by the word for cat which in turn is based on its voice. And the word for cat in Egypt was influenced by the tabby “M” mark on the forehead. The whole process seems to have been influenced to a certain extent by this famous tabby “M”. And if not, it is fun speculating.

Origin of the word meow to Cat Facts