I have been in love with cats since I can remember as I was raised with cats from day one of birth... my parents have always taken in stray cats and they now have a few Maine Coons in their bunch of 19 cats.. LOL

Well I moved out on my own with my wonderful girlfriend and her 3 kids (7, 4 & 2) and we decided it was time for a pet and figured a cat would be perfect for us and the kids so off we went in search of a cat.

The story starts when my girlfriend drove 60 miles to pick up a cat from a lady who had cancer and could no longer take care of her cats.

Well the cat ended up running out the door as they were trying to get it into the carrier.. LOL

Long story short we did not catch the cat. 🙁 we both felt horrible.. there were no more cats in the paper so we headed off to the local animal shelter.

When we walked in and we looked into the cat area we spotted our big boy Mr. Jinx. He was a 3yr old male Maine Coon that weighed in at 16lbs and was skin and bones.. So we adopted him immediately and have had him for 2 months.

He is weighing in at 20lbs now and is an awesome cat.. It amazes us both how someone could let him go.. I guess that is just us though and our love for cats (especially Maine Coons.

Thanks for your time... pictures of our big boy Mr. Jinx is attached.

Here is another picture: 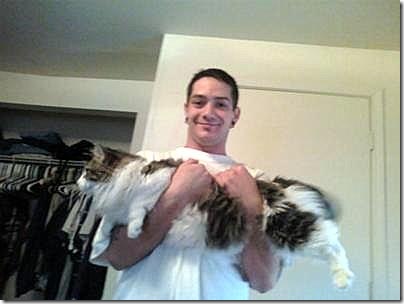 Well my fiancee and I adopted another cat from a girl who took him as a therapy cat for her son as her son has a touch sensory disability. Her apartment got broke into so she moved and was unable to keep the cat where she moved to....that's the background info.

He is a male 2yr old possibly either Main Coon or Ragdoll not for sure as he is not a full blooded cat.. but none the less he gorgeous and has become part of our family. His name is Whisper and our Mr.Jinx's new best friend.. Just thought i would share our good news..

Here is a photo of Whisper: 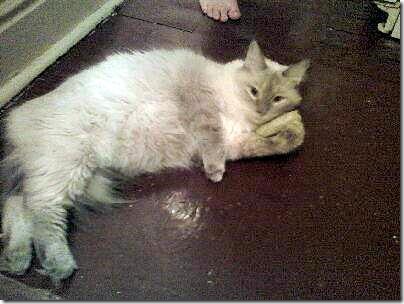