↓
Home→Uncategorized→Peeper: A Tame Cat With a Wild Heart

Peeper: A Tame Cat With a Wild Heart

Peeper was one of the smartest cats I had the pleasure of owning. She’s also one of the few I acquired on my own instead of rescuing. The first time I saw Peeper she was in a small cage in a pet store in Greenville, SC. She was a beautiful, healthy, little black kitten and I fell in love with her at first sight. The owner of the store told me she was 8 weeks old. This began one of the funniest cat relationships ever.

My daughter Laura was only a few years old at the time. I placed Laura in her playpen before letting my new kitty out of the cat carrier. And then the fun started. Peeper ran under the couch. I would follow her and she’d come out the other side. She would spit and hiss and slap and then run back under the couch. I put on oven mitts so if I were bitten there was a layer of protection. 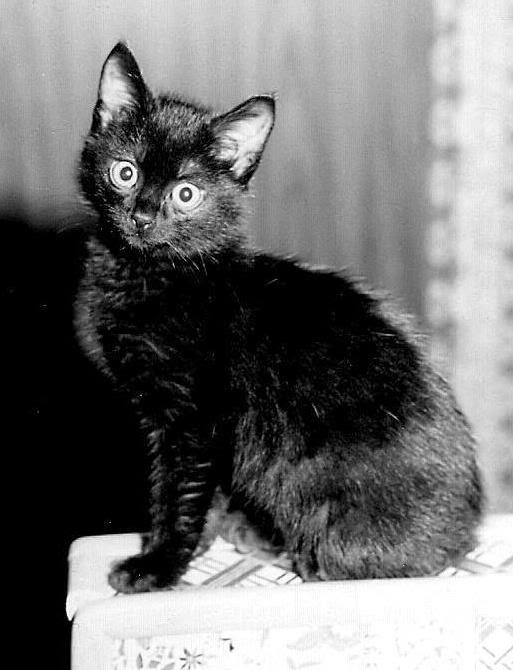 Peeper as a kitten - Photo by Joyce Sammons

This went on for over an hour. My daughter was laughing her head off at me and the cat. I guess we looked like something out of cartoon land and we were the feature attraction.

Years of experience have taught me not to use this approach with a new kitten. Most of the ones I rescued and brought inside hid for the first few days and slowly became confident enough to come out. My only defense is I wanted to hold my new kitten and make her feel loved.

Peeper became a great cat but she preferred the outdoors. She got her name from a reflector name tag I put on her in those first few days. She would hide inside the house and tuck her head into her chest and “peep” at me. It’s like she knew the tag would reflect and I would find her. She also pulled this trick on me when she began her outdoor life. I would call her in at night. 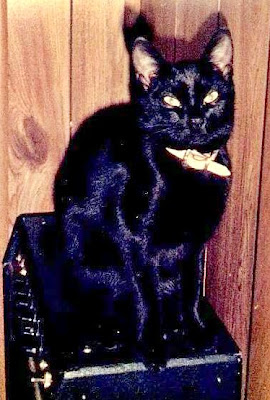 Sometimes I’d take a flashlight and try to coax her inside. She would tuck her head into her chest which kept the flashlight from reflecting off of her green eyes or off of her reflector tag. There were a lot of nights she slept in the tool shed because that was what she wanted.

I had her spayed at 6 months of age to prevent unwanted kittens. She had a different temperament than any other cat I’ve known. She was a true cat. She did what she wanted when she wanted. She became an excellent hunter. Her hunting territory mostly included my property and the two neighbors to the west. Between old barns and tall weeds she was a very happy cat.

When she was a few years old I lost her. Or should I say she dodged me. I called her and walked her territory with no luck. I then patrolled the side road that led to a main road which led back to the road where I lived. In other words I walked 2 miles in a square calling for a cat who didn’t want to be found. I checked with the shelters and they didn’t have her and I didn’t see her dead in the road and that was a comfort.

Two days later she came prancing under the fence.

This indoor/outdoor routine went on for a few years. I never saw her go near the road. Most of the time she showed up at night but it was her decision whether to come inside or stay out. She was only injured on one occasion and required a few stitches on her back near her tail.

The vet gave me orders to squirt hydrogen peroxide INTO the wound. That didn’t work out too well. I was able to pour the peroxide on her back and the wound healed well. Not exactly how I was supposed to treat it but no harm done.

I had a difficult decision to make when I moved out of the area. Take Peeper with me or leave her on familiar hunting grounds. My mama wanted me to leave Peeper with her so that’s what I did. Peeper remained with mama and I believe that’s why mama remained at home. There are articles stating people with pets to care for have a reason to get up in the morning. That’s how it was with mama and Peeper.

The day came when mama had to enter a nursing home for rehab for her rheumatoid arthritis and would be gone for several weeks. The neighbors would leave food for Peeper and I fed her once a week when I came up to visit mama at the nursing home. Unbelievably the cat GAINED weight while mama was gone. I don’t know how much could be attributed to food and how much to small prey. Peeper could catch a rabbit when she wanted. She had great hunting skills.

Mama was able to return home but it meant I would have to move back to the area to help with her care. She paid for my move and I commuted 2 hours a day with my photography job. I don’t know who was happier-mama to be at home or Peeper that she was back. Peeper had just turned 9 years old and remained in the yard more than she did in her younger years. She was back to her indoor/outdoor routine and was content with the whole situation.

One morning mama called me shortly after daylight. She said she had heard dogs barking in the yard and wanted to know if I had Peeper inside. She had heard a cat cry out with all the commotion and was worried. I had my other cats inside so if anything had happened Peeper was the only one outside. I hurried down to her house and I was calling out for Peeper with every step. I knew which path she would use when she went to hunt on the neighbors property. I took the sidewalk 2 houses over and that’s where I found her.

There wasn’t a mark on her but I’ve heard dogs sling a cat from side to side to kill it. She died 6 feet from safety. There was a HUGE tree and if she could have reached it the tree would have saved her life. There was no proof as to who the dogs belonged to. I heard thru the grapevine that one neighbor was having a hard time keeping her animals in her fence but there was no way to accuse anyone. I know those dogs came into our yard and chased her down and killed her. She had a good life and I’ve never had another cat like her. We buried her in her favorite outdoor spot.

Peeper: A Tame Cat With a Wild Heart to Feral Cats