↓
Home→Superstitions→People changing into cats due to dark forces

The country is Kenya but lets not fool ourselves. Although there is probably more superstition within the African continent than elsewhere, cat related superstition could happen anywhere, even middle America or the West End of London, UK. Some Chinese people still believe that eating a tiger’s penis gives them a better erection 😉 It’s a mad, mad world and I want to get off. 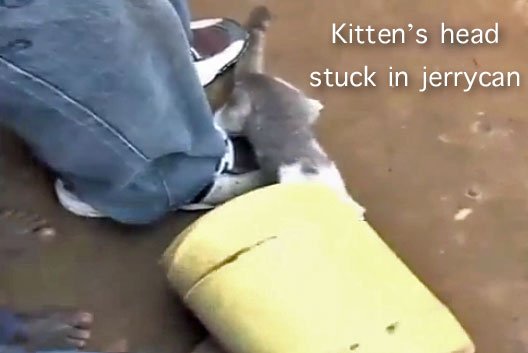 Kittens head stuck in jerrycan. Still from video below.

Yes, God forbid, it is still with us in the world; superstition attached to the domestic cat. I find it amazing that people can still believe that people can change into cats due to dark forces. This idea is a direct descendant of the witches familiar from the European dark ages. Today, a significant number of people still believe as people believed 600 and more years ago. Why was the cat targeted so maliciously in this way by superstitious people?

If something is worth believing and it is based on sensible fact and experience then it should be believed for ever but if there is no sensible basis for the belief and it is dangerous to people and in this instance cats, people should move on and get it out of their system as quickly as possible. Sadly, the terrible weaknesses and deficiencies in the mentality of humankind shows up when it comes to superstitions.

SORRY THE VIDEO HAS GONE DEAD BECAUSE THE ACCOUNT OF THE PERSON WHO UPLOADED THE VIDEO TO YOUTUBE HAS BEEN TERMINATED.

In this story we have a little kitten whose head got stuck in a jerrycan. The can had probably been used to carry food or a drink, perhaps water. He was thirsty and got his head stuck as the opening to the can was narrow.

Local people saw this innocuous event as a person who had been possessed by evil forces and turned into a cat and therefore they refused to touch the kitten or get involved. It would have taken 10 seconds to remove the can from the cat yet this poor creature was stuck for 4 days until someone, who was more enlightened, removed the bloody thing.

A doctor (perhaps he was a vet, I don’t know) who through education has become more enlightened declares to the media that there have been no examples of cats connected with spiritualism. He chooses his words carefully possibly to avoid offending someone.

There you have it. Superstitions about the devil walking around as a cat are still firmly with us. Witchcraft is alive and well in Africa – and elsewhere. When will humankind move on and grow up?