The percentage of suspected adverse reactions to vaccines in cats was assessed in the largest British published survey as referred to by Dr Bruce Fogel in his book Complete Cat Care. Mild reactions such as a low fever for a day or pain are not uncommon nor unusual and the owner should not be worried. The listing below refers to more severe adverse reactions which sometimes occur, as we know. 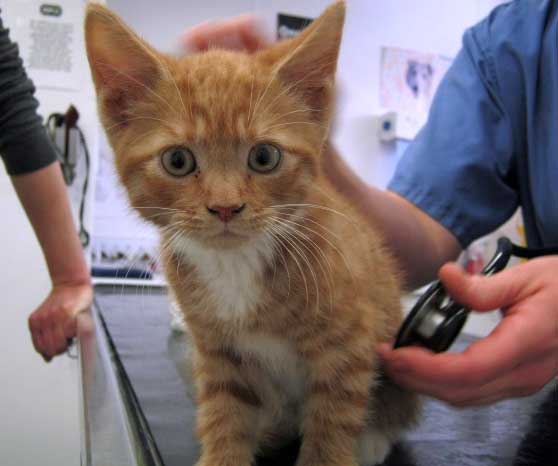 Kitten in veterinarian’s surgery getting ready for a vaccination. Photo in publiic domain.

The survey concluded that one out of every 15,000 inoculations resulted in a severe adverse reaction. Usually the sufferer was a cat under six months of age. I am going to refer to America, in which, I’m told there are 95.6 million domestic cats. I’m going to round that number up to 96 million. This figure is good for 2017. It is likely larger now in 2020. But the figure is an estimate anyway so we should not get too picky about precision.

Photo in public domain – words and highlights added by PoC.

It is hard to find data on the percentage of domestic cats are not vaccinated in America. It is surprisingly hard. I can’t find recent data. I found a study carried out by veterinarians at the University Of Wisconsin – Madison School of Veterinary Medicine in cooperation with the Dane County Humane Society. It was carried out in 2008 believe it or not. They found that less than half of puppies and kittens were at that time being vaccinated. I will extrapolate that figure to 2020 by saying about half of cats in America are vaccinated at present. FYI – in the UK, 35% of cat owners did not have their kids vaccinated and 41% of older cats haven’t received their regular boosters.

Percentage adverse reactions and estimated number of US domestic cats based on figures from the UK and USA.

The research suggested that the vaccination itself did not cause the sarcoma. They believe that the sarcomas are a reaction to inflammation and that individual cats are genetically predisposed to this reaction. Other studies have shown that sarcomas at injection sites are not necessarily caused by vaccines. They could be caused by an antibiotic being injected.