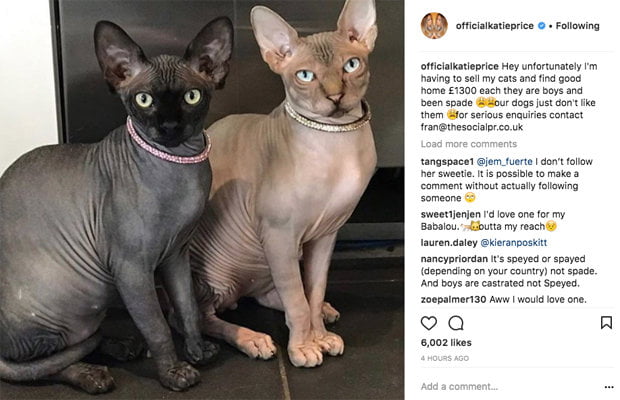 For Americans who may not be aware of this woman, Katie Price is a UK celebrity who is constantly in the news, and she makes a living by being in the news. As she’s got older, she has been through all the options for plastic surgery and tattoos and she’s burned through her income and capital which at one time was good but which is now precarious. There’s lots of talk about her going bankrupt and there are signs of it.

She lives in a house with a swimming pool and a tennis court which are not maintained. And the current news is that she is selling all her animals. She is a keen horsewoman and has several horses which are going. She has llamas which are also being sold for £2,000 each apparently.

What interests me is that she appears to have purchased two Sphynx cats, Dobbie and Hagrid, which as you may know are hairless. Peter Andre one of her former husbands learnt that she wanted to sell them. The sale of the animals is to cut maintenance costs and to raise some capital. I have learned that she tried to sell them in December 2017 on social media, specifically Instagram. At that time she was asking £1,300 per each cat. Her reason given was that they did not get on with the dogs. There was outrage from some of her followers.

Peter Andre objected to the sale of the Sphynx cats because their children, Princess and Junior, own them. Katie Price’s current estranged husband, Kieran Hayler, has been asked to find homes for some of the animals.

Katie Price wanted to make a sex tape (I presume it’s some sort of pornographic tape) order to raise millions of pounds but her agent said that she’d raise more money from selling the cats.

No doubt being a celebrity, albeit a fading celebrity, she chose Sphynx cats because of their unusual appearance. Celebrities have a habit of selecting unusual cat breeds such as the Scottish Fold (Taylor Swift) and dwarf cats (Paris Hilton) and more recently miniature dogs. I note in the press this morning that there is a current craze among celebrities to carry miniature dogs around but these animals are unhealthy because their cranium is too small for their brain and there are other health issues. It is a sorry state of affairs when pet breeders breed unhealthy animals to service the demand from celebrities who make their precarious living by being photographed walking down the street carrying these animals.

Over the years there’s been a lot of talk about Katie Price’s wealth which has been valued at about £45 million. People who know better don’t believe it. It is likely that she was never worth more than a few million and even that has been dissipated. She’s said to spend over £10,000 a month to service her extravagant outgoings and appears to be currently living hand to mouth. Katie Price has a couple of businesses which banked less than £10,000 combined. She is currently in Thailand on holiday.