The debate over the number of birds killed by cats has grown stronger over the past few decades, especially since the internet came into play. Information once found only in magazines or periodicals can now be read with the click of a mouse, and anyone out there with a computer can either read up on the subject or write an article of their own.

The luxury of writing and then readers believing everything on the computer screen has led many to believe there’s a great danger to the bird population and that danger is coming from domestic cats. The media fails to get their facts right sometimes. The battle between bird lovers and cat lovers has grown so heated that a new petition titled “Petition: American Bird Conservancy, stop your witch hunt against cats” is now making the rounds.

The truth is that cats have been part of the natural landscape for more than 10,000 years. Birds have managed to survive, and the cats have managed to survive. It wasn’t until the building frenzy that has become widespread in the United States, and most likely the rest of the civilized world, that bird populations faced the true issue. When forests are cut down to build apartment complexes, birds are run out of their natural home and can’t survive in an unfamiliar and often cruel environment.

Due to environmental changes, including urban development, the list below is what’s REALLY killing the birds

Alley Cat Allies, the only national advocacy organization dedicated to the protection and humane treatment of cats states:

“Most species who call these ecosystems home are not adaptable to the human landscapes left for them. Human threats like habitat destruction, wind turbines, and pesticide use are only some of the human pressures on bird populations, and they will only increase if we continue shifting the blame to cats.”

Alley Cat Allies has described a study published by the publication Nature as continuing propaganda to vilify cats. Much of their material is outdated, some of it by as much as half a century. They go so far as to cite discredited researcher Nico Dauphine, who was convicted a few years ago by a D.C. jury for attempted animal cruelty after trying to poison cats and then fired from her job at the Smithsonian.

Another inaccuracy promoted by those who call cats “vermin” is that cats are continuously on the prowl for birds. A Georgia experiment conducted by the University of Georgia and the National Geographic Society conducted a study from November 2010 to October 2011 using 60 house cats who spend 5-6 hours daily running loose tells a different story. With lightweight kitty-cams strapped on to their necks, the cats were observed as they went about their day. Their “kills” were broken down into (see also this page):

Mr. Woody Woodsman, who is a frequent visitor to PoC, believes it’s acceptable to kill these outdoor roaming cats, as long as the death is quick and painless (although he is unable to guarantee that). People who believe it’s legal to kill a cat should keep in mind that all 50 states now have animal cruelty laws in place, and many have additional felony animal cruelty laws.

While the American Bird Conservancy (ABC) is a 501(c)(3), not-for profit organization whose mission is to conserve native birds and their habitats throughout the Americas. ABC recently initiated a new campaign dedicated to educating the public and policy makers about how keeping cats indoors is better for cats, birds, and people. Several videos can be found here that represent their viewpoint of cats vs birds.

Cats are being killed at an alarming rate in shelters. They’re killed as they cross busy roads. Millions of dead cats yearly, yet the bird population is still at risk. Why? It’s because to curb the death of birds, we would have to change as a society, which isn’t going to happen. Urban development made in the name of progress will almost always win out over protecting a species. Any species. 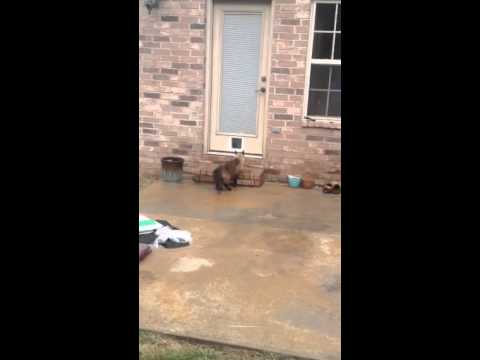