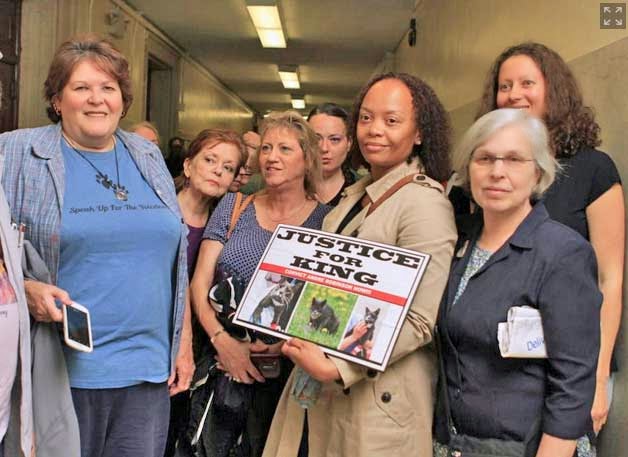 I like to see photographs like this because they are unusual. We know that there are lots of people would like and love cats, or all animals, but it is not often that we see a group of cat lovers together in a photograph. This photograph was taken within the confines of a court building because these ladies were waiting to politely confront a young man whose name is Andre Robinson who was attending court on a very short hearing as part of prosecution proceedings for the crime that he has allegedly committed in kicking a stray black-and-white cat whose name is King. The case is well-known and you can see another page on the topic here.

Andre Robinson’s mother, Mary Kirby, was with him and she confronted the cat loving ladies with the words “leave these arseholes alone”. What she was saying to her son was to stay out of trouble and not to confront these advocates, as they are described, in a newspaper article. They are indeed advocates, meaning the voice of vulnerable animals living in a human society. There is a need for people like these ladies and personally I am pleased to see them at court doing their best to make sure that justice is done. Their presence is required because, on my judgement, often prosecutions for animal cruelty result in relatively light sentences on the conviction of the accused.

Society undervalues the companion animal judging by what goes on in criminal proceedings for animal abuse. This does not surprise me because there are other indications that, in general, people undervalue animals.

I suppose that high profile criminal cases like this one help to encourage the courts to at least sentence appropriately meaning near the maximum for cases of animal cruelty. I refer to the maximum because the maximum sentence is already relatively low.

Another observation and one that will no doubt not go unnoticed is that all the cat loving advocates in the photograph are ladies which reinforces the stereotypical image of the crazy cat woman, a wholly incorrect and unfair stereotype. These are good people taking time off work to attend court and make their point. The hearing lasted about 60 seconds so for these people to travel a distance and take a day off work in the interests of cat welfare is admirable.

Photograph of a Group of Cat Lovers to Home page