Here are three photographs of the world’s most expensive cat as decided by Guinness World Records. My reasons are set out below. Please remember that the photo is copyright protected. 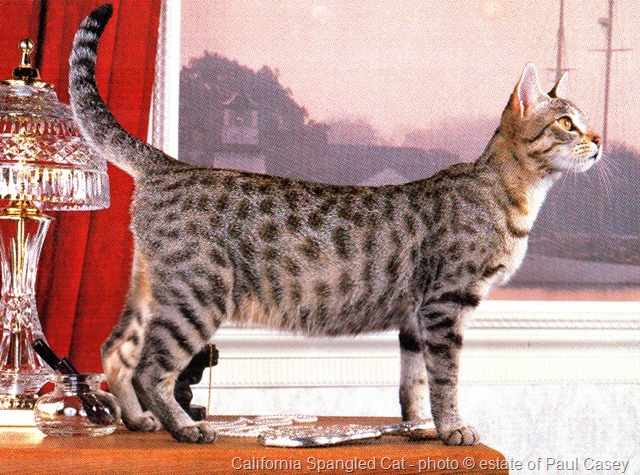 According to Guinness World Records, the world’s most expensive cat was a California Spangled Cat which was bought for $24,000 (£15,925) in January 1987. This individual cat was the display cat on the 1986 Neiman Marcus Chistmas Book. The cat made a big impact at the time and many orders were placed. (Note that this breed’s name is “California” not “Californian”).

Some time ago, I was fortunate enough to be contacted by a lady whose name is Udana Power. She was a close friend of the founder and creator of the California Spangled Cat, Paul Casey. Paul Casey was a very talented person and you can read about him by clicking on this link.

Udana provided me with photographs of the California Spangled Cat which featured on the 1989 calendar about this cat.

I believe that the cat featured on the 1989 calendar are photographs of the same individual cat that featured in the Neiman Marcus catalogue of 1986. Although, of course I can’t be completely sure. 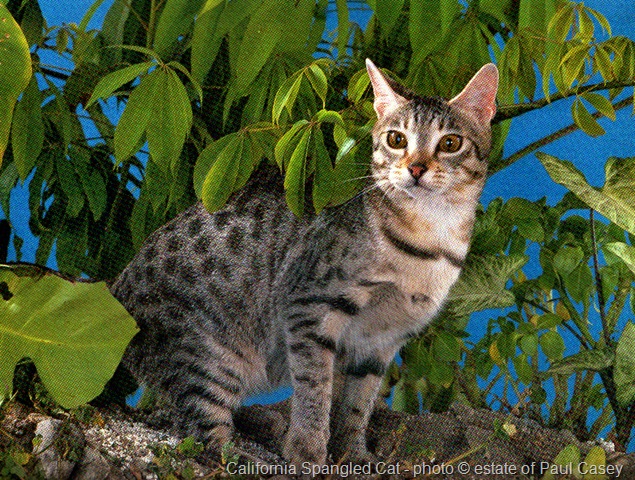 It is certainly very likely to be the same cat because Paul Casey would have featured the best cat that he had both on the Christmas book and the calendar.

If I’m correct, therefore, the pictures on this page are of the Guinness World Records most expensive cat.

You can read about the full history of this very rare cat breed on this page which features the pictures you see here. The page was written years ago immediately after Udana sent me the photographs. The photographs are actually scanned copies of the original calendar, which I received. You can see the screen printing. 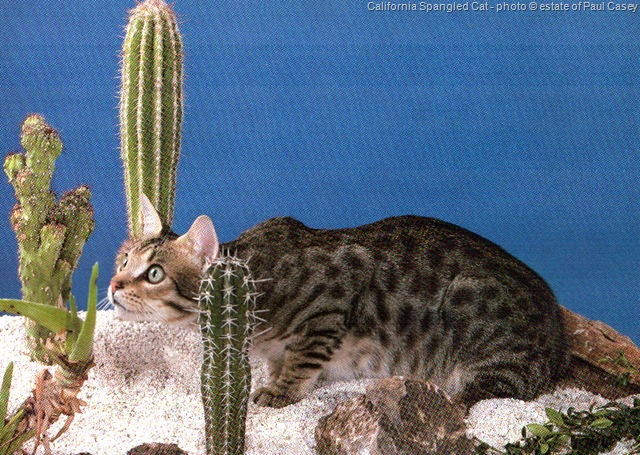 I’m sure a lot of readers of this page will notice that the California Spangled Cat featured is similar to the modern day Bengal Cat.

This was a time in the history of the American cat fancy when there was a flurry of new cat breeds and great interest in wild cat hybrids.

It should be said, however, that the California Spangled Cat is not a wild cat hybrid (although please see Sarah’s comment below). In that sense it is more like today’s Ocicat, which is also a totally domestic cat albeit a hybrid.

Finally, I would at least have to query whether Guinness World Records are correct in saying that this individual cat is the world’s most expensive because A1 Savannahs sold quite a few first filial (F1) Savannah Cats and the best quality F1 Savannah Cats-called A1 Supremes-could well have sold for $30,000 and more.  However, when inflation is factored in the price of the California Spangled would have been an astonishing: $38,105 (£22,692).