This is a really nice picture of a relatively rare cat breed, the Oriental Longhair. The picture caught my eye. It is by Nadi Hammouda, and I hope that they accept the publication of the picture on my website. The breeder is Paula & Petri Jaakkola of cattery Mummeli.

What I like about this cat is its normalcy. The very similar Oriental Shorthair cats are normally bred to extreme in my view. They’ve become too slender, and their ears are too big, and the anatomy just does not work harmoniously together. But this cat is more normal, and everything is in harmony for me. 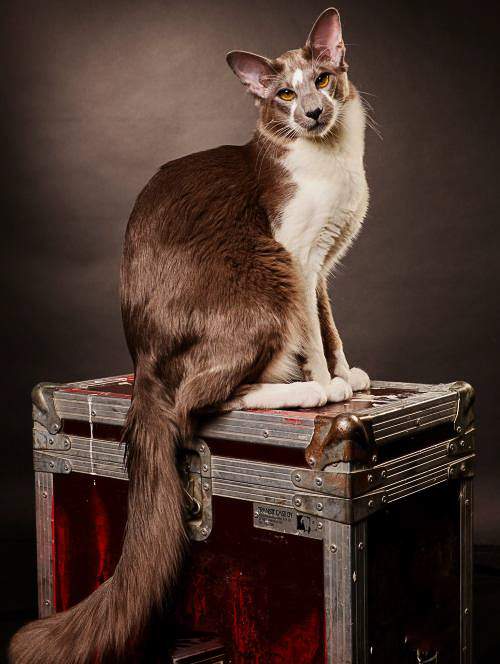 In essence, the Oriental Longhair is a Siamese cat with a semi-longhaired coat and a whole range of colours and patterns. But then again, the “modern Siamese” as I call it is often bred to extreme as well, but this cat isn’t.

And this cat does not look like a Siamese cat even when you ignore the coat which is a bicolour pattern with a beautiful, silky chocolate coat juxtaposed against the white. There is a gloriously plumed tail and a nice strong, male face. The ears aren’t too large, and the coat pattern is really nice as well. I don’t think that this cat was bred in the US, but I am guessing.

The Oriental Longhair is described as a “refined cat of medium size” by Gloria Stephens a former cat show judge. This breed shares the breed standard with the Oriental Shorthair. As you might imagine, the only difference is the length of the coat. I stress, however, that in this instance there is an additional difference in that this cat is not super-slender or bred to extreme like many Oriental Shorthair cats are.

The Oriental Longhair breed commenced in America in 1985 with The International Cat Association (TICA) being the first association to recognise the breed for championship status. The CFA followed in 1995. They bracketed it with the Oriental Shorthair in a separate division.

Cats of this breed are sometimes known as “Angoras”. And in Europe they can be called the “Javanese“.

Gloria Stephens says it takes a long time to “establish both type and the semi-longhaired coat”. By “type” she means the body conformation according to the breed standard.

The cat associations recognise this breed in all colours, in all divisions in the traditional category and the basic colours are black, chocolate, cinnamon and red. There are also diluted colours and the bicolour as seen.

It is said that their temperament is more sedate than their shorthaired cousin but then again, the Oriental Shorthair is a demanding under your feet type of cat.

Below are some more articles on this breed. There are more if you care to search.