Spangle, the cat companion of Shirley Anthony, was euthanised recently because as he was walking outside, a police dog attacked him and injured him so severely that he was left incontinent, paralysed and with fluid on his lungs. Spangle was treated by veterinarians in an attempt to save his life but it was decided to euthanise him 6 days after the attack on 6 July. 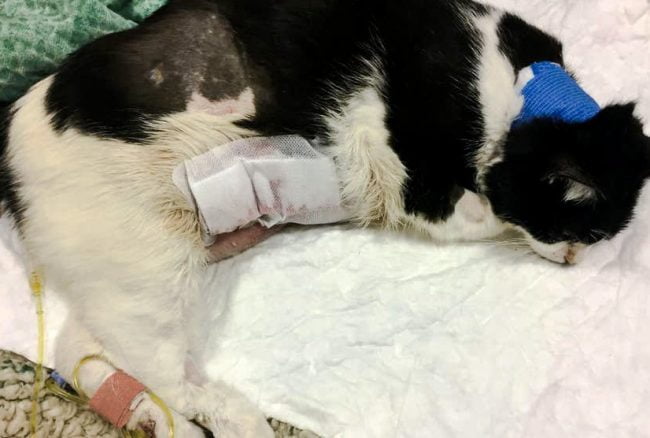 The police paid the £8,000 veterinary bill. So how did it happen? It must be an act of carelessness.

The police had tasered and arrested a man in a dispute near Shirley Anthony’s home. There were dog handlers at the scene. They remained there to search for other suspects. One of the handlers let his dog of the lead to allow him/her to go to the toilet. He chased Spangle and mauled him leaving him with many bleeding wounds all over his body.

“The dog literally attacked. It was shaking Spangle around in its mouth and left puncture marks all over his body. When the policeman called him back he dropped him. I’m absolutely distraught. If only he had put a lead on him, my cat would still be here.” – Shirely Anthony, Spangle’s owner

The police dog handler did talk to Shirley Anthony after the incident and apologised. He was clearly very upset and he told that his dog does not like cats. The cats normally run away he said (as reported by The Independent newspaper).

As I understand it, the general law in the UK is that dogs must be under control at all times in public places. There may be some local laws which insist that owners have their dogs on a lead that all times. This applies, for instance, in parks where there is wildlife.

Clearly, this policeman lost control of his dog in a public place and therefore he might be in breach of the general law and he is certainly negligent. I don’t see the reason why he had to allow his dog to be free from a lead to go the toilet. In addition there is a moral duty to collect faeces in public places. In fact, in the UK, local authorities have the power to make Dog Control Orders in relation to public land which can specify that people must remove dog faeces and keep dogs on leads.

The police have paid compensation in terms of veterinary costs but they have not compensated the woman for emotional distress and the loss of her cat as far as I can tell. Her cat has a monetary value. The police must compensate her for that.

I would like to know whether this policeman was reprimanded in some way for his carelessness.

The police made a statement after receiving a complaint from Shirley:

“Any confirmed or alleged dog bite involving any MPS police dog is taken very seriously and thoroughly investigated. Licensed police dogs are subject to continual training and assessment for obedience, safety and control…”

It would be nice to know the outcome of the investigation. We won’t know!