↓
Home→Cat Behavior→hunting birds→POLL: how many birds does your cat kill per year? Please complete it to scotch ‘rumours’ of cats killing billions of birds.
ShareTweetPinterestWeibo
RedditWhatsapp

Please complete this poll. It won’t take you more than five seconds! It is half way down the page. I think it will help because the ornithologists like to promote the idea that domestic cats kill billions of birds annually (see base of page) and this only applies to America! Ornithologists want domestic cats to be kept inside all the time. I understand it and am sympathetic. But they have an agenda which is anti-cat. I understand that to. However, their knowledge on the predation of birds by domestic cats comes from studies which are carried out with a relatively small number of cats. They then extrapolate the information to the entire country. What I’m getting at is that I don’t believe the information is correct. I don’t think it is accurate enough to boldly state that domestic cats kill billions (up to four thousand million) of birds annually based on small-sample studies.

There is no doubt that domestic cats do kill birds but is much easier for a cat to kill a mouse or some other ground-dwelling mammal. In Australia reptiles are often killed. They are on the menu for cats. I want to see if I can contribute to this debate and get some decent information about domestic cat predation on birds. If I can get a thousand responses to this poll it would be great but I don’t expect it.

My cat kills birds. He kills pigeons because sometimes they wander around my backyard. But to the best of my knowledge, he’s only killed three pigeons in his entire life and he’s about six years old. I would say that he kills less than one bird per year on average and it may well be nearer none. He kills far more mice. He must have killed over 50 in his life.

I’m not saying that he is a typical cat but I do know that he is a very good hunter. He’s allowed outside. And if he is an example of a good domestic cat hunter and he kills less than one bird per year, I don’t think we can arrive at billions of birds annually killed by the entire population of domestic cats in America.

There are about 90 million domestic cats in America. If they were all my cat there would be 90 million birds killed annually which is far, far lower than the estimates that we constantly read about on the Internet and disseminated with great eagerness by outspoken ornithologists with their obvious agenda.

SOME MORE ON PREDATION OF BIRDS BY CATS: 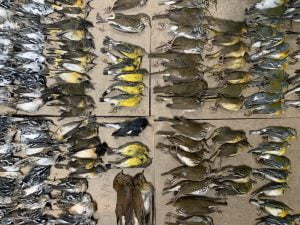 Hundreds of dead birds picked up in a morning at the base of 1, 3, 4 and 7 World Trade Centers

The World Trade Centers (WTC) are proving fatal to migrating birds. The topic is of interest to cat advocates due ...
Read More

The tufted titmouse is a bold and courageous little bird which has been filmed plucking fur from animals, including cats, ...
Read More

This impressive owl has made itself look much larger and it rocks from side to side as a means to ...
Read More

If you want to slash bird deaths at a stroke then turn the lights off at night in city buildings ...
Read More

Rats or cats? Which is the worst for killing island species?

Every scientific paper that you read regarding the extinction of native species on small islands in archipelagoes always refer to ...
Read More

This is a strange video. It is not obvious that the rooster and cat are play-fighting. Some observers might think ...
Read More

I can think of two instances (but there are many more) of exposing, through good intentions, birds to predation by ...
Read More
Please comment here using either Facebook or WordPress (when available).