August 28th 2010: The majority of people are against declawing according to polls. I don’t know who has voted though; meaning from which country. The internet is international; anyone from anywhere can vote. Before I go on, I would like to thank Jennifer Copley for her fine post on suite101.com and the Facebook group: Declawing Crippled my Paws for pointing me in the direction of Copley’s page.Although I said anyone cat vote, the figures from these polls indicate that the majority of voters are Americans as they match more or less the official figures of declawed cats to total number of cats.

A PetPlace.com survey result published on this site some time ago also concurs with the poll figures. The question was, “should declawing be banned: 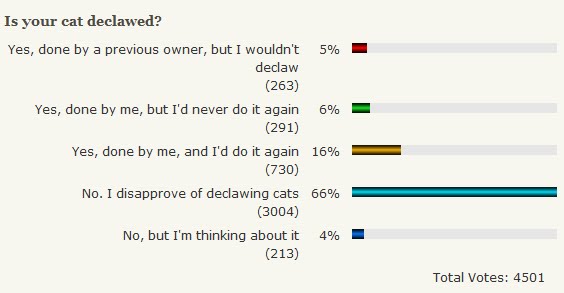 The above poll is a straight poll run by About.com. In this poll 16% of the voters are committed to declawing – i.e for declawing. Another 4% are on the fence (total 20%). The approximate number of declawed cats is in the order of 20 million in the US, I understand, and there are about 82 million domestic cats in the US (AVMA figures at 2007) making about 24% of cats declawed. So these figures more or less concur.

The good news is that 77% are against declawing taking three categories and combining them. This is about three quarters of the total public. This leaves an approximate 25% for declawing, which also more or less concurs with the official statistics as far as I can tell. 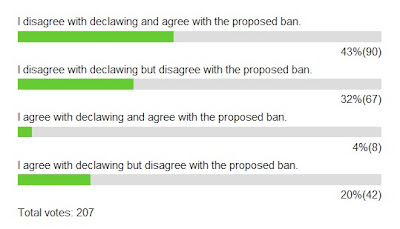 Above: This is a vote on a legal ban on declawing. The site is Petsugar.com. This is a US site and I believe that most of the voters are US citizens. One figure is odd. 4% of voters say that they agree with a ban but agree with declawing, a conflict. I think these people might have misunderstood the question. However a healthy 43% agree a ban while in total 52% disagree a ban.

Above: This is another About.com poll but I think that the voters are involved in veterinary medicine – not sure though.

In an Orange County poll 64% think declawing a cruel and unnecessary practice, while 39% say it should be left to the cat owner to decide.

And in another poll on community.thenest.com, 76% say declawing should be outlawed “because a that is cruel and a cat can’t have a good life without it’s claws”.

OK, I think this is pretty overwhelming evidence that in general people in the US don’t like declawing.

The only weakness with these polls is, as mentioned, we are not sure which country the voters come from. For example, if only UK people voted it would be almost 100% against declawing, I suspect.

Putting that to one side for the moment, there is no doubt in my mind that there are many millions of Americans who are against declawing.

Where are you? Who are you? Please shout out as loudly as you can. And please join the proposed anti-declaw demonstration, that is loosely scheduled for July 2011 at the AVMA convention in Saint Louis, Missouri! See this page please: 100 Demonstrators Needed.

We need 100 good women and men with passion and commitment who have the motto that I have. And I quote, Liu Wei a young man who plays piano beautifully with his toes as he has no arms:

If we demonstrate and protest and do something memorable we can remember that for the rest of our lives and live knowing that we did something that is genuinely for the good or our dear cat companions and for ourselves as it will surely make the world more civilized.