↓
Home→Uncategorized→Poor Goldie Was An Accident Waiting To Happen

I still remember the day I met Goldie in 1985. He was underneath a shrub in my mother-in-law’s yard. I could tell he was between 5-7 weeks old and the expression he gave broke my heart. He was this tiny gold and white tabby and his eyes were pleading with me to take him home with me. So of course he got his wish.

I kept him inside for several days and watched him for any sign of illness. He appeared healthy so I visited the vet just to be sure. He got his first shots and took the exam like the tough little man he would become. 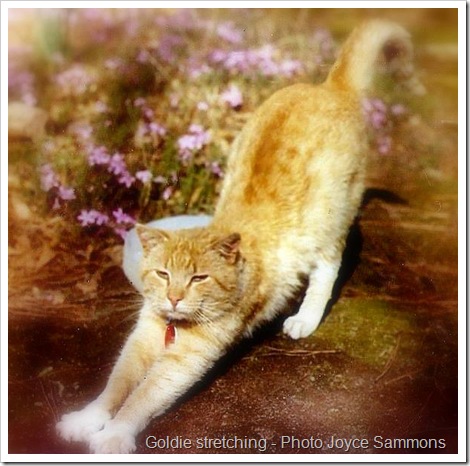 I could tell he wanted to experience the outdoor life so I would let him out several times a day. My daughter Laura was 18 months old at the time and she would accompany me outside when I’d call him to come inside. One day I called him and heard this terrible MEOW. I lived in a mobile home at the time and the sound was coming from under the home. If you’ve never been under one of these homes there are axles made of heavy metals. There were round holes every few feet along part of the axle. Goldie had put his head thru one of the holes and couldn’t get it back thru. 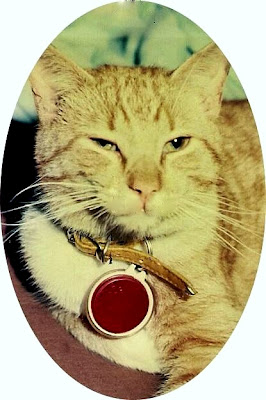 He could barely touch the ground with his back feet and was essentially hanging himself. I dove under there and held his body so the stress wasn’t on his neck. Then I screamed at the top of my lungs for Laura’s daddy. He was in my mama’s yard and came running. Laura was running loose in the yard and I didn’t want her to wander off. The property was fenced in but I never took chances. 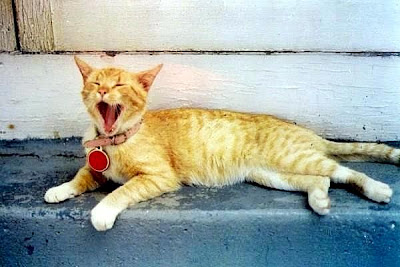 I asked her daddy to take her down to mama’s and explained as best I could what was happening. It took awhile to get Goldie loose. First we tried cooking oil and then dish detergent. Now I had a greasy-headed kitten who was no closer to having all four paws on the ground. We had to double team the kitten. I held him and comforted him while Laura’s dad took a chisel and hammer and beat a dent into the metal. It’s as difficult as it sounds and I worried Goldie would lose his hearing from the noise.

It took close to half an hour to free him. I took him inside where he had to endure a bath to remove the oil/detergent mix on his neck. So now I had a clean, traumatized, possibly deaf and definitely exhausted kitten. He slept the next few days, only getting up to eat or use the litter box. 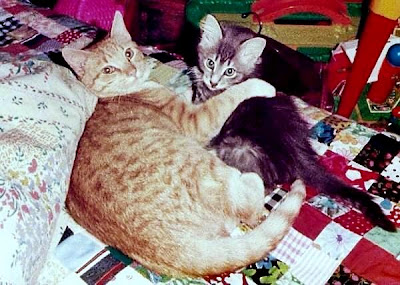 Goldie gained weight and grew into a magnificent tomcat. He would have some awesome fights with the neighbors cat. It’s a miracle he never came home with even a scratch on him. Then around 1989 he began losing weight. It was disturbing that such a large cat was losing weight yet his appetite hadn’t changed. We visited the vet and he looked right at me and said “he's doing too much tom-catting.”

He spent too much time fighting males and searching for females and I put a stop to it. Goldie hadn’t been fed for the day since we arrived at the vet’s office at 8 a.m. and this made it possible to neuter him immediately. I left with instructions to come back before closing to pick him up.

He did great after his “snip snip” surgery and put on weight until he was back to his normal healthy size. It was shortly after his surgery that I moved an hour away for a photography job and left Goldie with mama.

He did well without me and I visited him once a week when I came up to check on mama. One morning I got the call every cat mama dreads. Mama told me Goldie had come home that morning and instead of going from ground to fencepost to ground he crawled UNDER the fence. The cats had made this new path for quick getaways but most jumped up and over. I guess it’s a cat thing. Mama said Goldie collapsed as soon as he was on her property.

She gathered him up and drove him the short distance to my favorite vet Dr. Jamison. He’s the one who treated Smokey and had to be near 70 years old at the time. I arrived at his office less than an hour later and he took me back to see Goldie.

Goldie looked fine. He sat up in the cage to greet me and allowed me to rub his head. Dr. Jamison explained Goldie had been poisoned. There were burn marks in his throat and he had a temperature of 106. He told me it would be up to Goldie on whether he lived or died. It broke my heart to leave him. I didn’t want Goldie to think I was deserting him. He recovered and was able to go home a few days later. I took him home with me and turned him into an indoor cat. I noticed every time I brought out a new garbage bag he’d run and hide. I believe someone poisoned him and put him into the bag and he escaped.

He did great for nearly a year. Then one morning he urinated on the floor-twice. That wasn’t like him. I made a trip to a wonderful vet I’d found and explained about the poisoning. The vet ran tests and informed me Goldie had crystals in his urine. He did a procedure to drain his kidneys and bladder and sent me home with my cat and the medicine to treat him. Three days later I had to take Goldie back to the vet for another draining. There was a complicated procedure that could have been preformed that would have meant Goldie would have to wear a bag for urine and have tubes put in. There was no way I would put him thru that.

Goldie was always a lap cat. Any time I sat down he would jump in my lap for a good nap. Since this illness began I could tell he was in pain when he jumped. Still he did it to be close to me. The morning after the second draining I got up to prepare his food and I picked him up. Blood was coming out from his backside. I didn’t know if it was from his bladder or his rectum. I took him to the vet for the final time.

His problem was likely caused by the poisoning a year earlier. The vet said it was a common situation for a poison to damage internal organs. It just took it close to a year to produce any symptoms. I stayed with Goldie until he was gone. I couldn’t take any more and he was miserable.

It never gets any easier doing what is right for the cat.