Portrait of Cleophea Holzhalb is dated 1538. This is an early date to see a painting with a domestic cat featured so prominently. It is interesting for that reason.

The artist, Hans Asper, is not well known. He was Swiss and he lived to the good age of 72 in Zurich. He died in poverty apparently but was an important figure in Zurich at one time. He was on the city's council.

The painting is oil on wood - about 30 by 24 inches in size. It is very detailed. You can see in the enlarged section below the rings and, it seems, dirty fingernails!

Perhaps people washed less in those days, without wanting to be insulting. 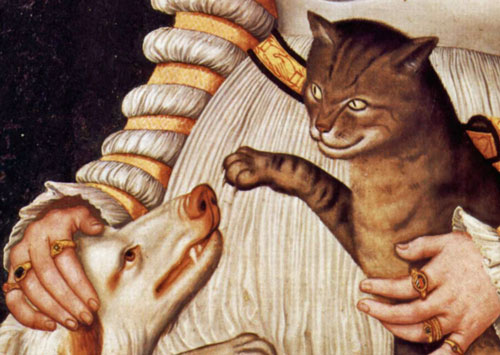 So what about the cat? The first point for me is that domestic cats and dogs were probably as important then as they are now. This woman would appear to be well off financially. I wonder if the better off kept companion animals more than the average citizen of the time? It may have been a bit of a status symbol.

The cat is a brown tabby; perhaps a mackerel tabby. The cat's face is painted anthropomorphically. In my experience this is the norm for the time. Perhaps it reflects the thoughts of the time. Animals are still treated badly today but even worse in those days. People saw animals in a human light it seems.

The cat's claws are out and the dog looks a bit threatening. They are playing I would think. Or, perhaps it is play that might turn to a bit of aggression in the near future.

Perhaps this is also a reflection of the way people saw animals in those days - as beasts fighting each other and "man" sitting above it all, supposedly civilized. This is the teaching of the old testament of the bible. Religion was more important in the 16th century. There were more believers because there was less science.

At least declawing was unheard of in those days, thankfully. Some things become more barbaric and beastly as the world becomes more civilised. Is it becoming more civilized? 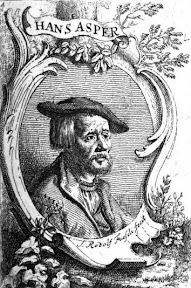 See more at cats in paintings.