Well, I was attracted to this portrait (below right) because it had a cat in it – what a surprise. And this is a very strange looking cat. Although it is strange for the simple reason that the painting is not meant to be naturalistic but stylized (I hope that is the case anyway!). 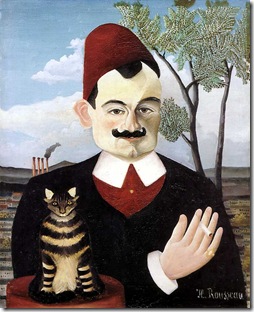 mackerel (striped) tabby cat. I have enlarged the part of the painting that contains the cat and made it lighter to get a better look at it (see below). Think of a striped cat and it doesn’t look like this cat. In fact this cat almost looks like a piece of pottery!

Despite being a stylised painting Rousseau seems not to have understood the anatomy of the domestic cat. This cat has what cat fancy people call “ear furnishings” sticking out of its forehead! Or that seems to be the case. What else can those objects be? The inside of the ears are very light, unnaturally so. The reason for this seems to be to mirror the shape and colour of Loti’s collar.

This is quite a small cat too, I would suggest. The whole of the cat is little bigger than the sitter’s head. Or is it that the head is abnormally large? Anyway, enough….Who is the sitter?

His name is Pierre Loti. This as a pseudonym. His real name was Julien Viaud. He was born 14 January 1850 in Rochefort, Charente-Maritime and died 10 June 1923. He was a French novelist and naval officer. He was apparently very shy and his friends called him le Loti 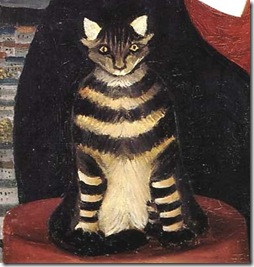 . Loti is the name, apparently of an Indian flower (lotus). This reserve, I feel, fits in nicely with his love of cats and it is for this reason why Rousseau painted him with a cat. The cat is almost certainly one that lived with Loti. I immediately warm to him for his love of cats.

The painting was made after he wrote Au Maroc (In Morocco) - the record of a journey to Fez in company with a French embassy. It was his first pure travel literature. Loti travelled a lot and seems to be well known in certain parts of the world. In Istanbul there is a nice hotel called Hotel Pierre Loti.

I suspect that this is why he is wearing a Moroccan hat, a fez. Loti must have brought some home to France.

Loti wrote about his cats frequently. Although it would seem that this was accomplished by inserting reference to cats within his books that were on different subjects.

What about the artist? Henri Rousseau is very well known. His best known paintings are of jungle scenes. He never left France or saw a real jungle but visited botanical gardens. His style was both childlike and sophisticated. At the time he was criticised and ridiculed 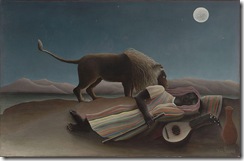 and he wanted acceptance. This begs the question why he did not “improve” or modify his technique to create more natural depictions that would have been more acceptable to the establishment. Thank goodness he didn’t.

One of his most famous paintings is called The Sleeping Gypsy (see picture – click on it for a larger image). This depicts a male lion and a sleeping gypsy. The lion has the same piercing and abnormally small eyes as the cat in the portrait of Pierre Loti.