Portrait of the Painter Franz Pforr

This is an article about this painting, Portrait of the Painter Franz Pforr. The German title is Porträt des Malers Franz Pforr. I am interested in it from the standpoint of the cat, naturally!

But first a bit about the painter, Friedrich Overbeck, and the main subject, also a painter, Franz Pforr.

Friedrich Overbeck (1755-1821) was a German artist. His father and grandfather were lawyers. Friedrich Overbeck himself seems to have been raised very properly and religiously. He would appear to have been a very proper and moral person. In any event he found his training at the academy of Vienna vulgar. He turned to his religious beliefs and moved to Rome where he spent 59 years painting. 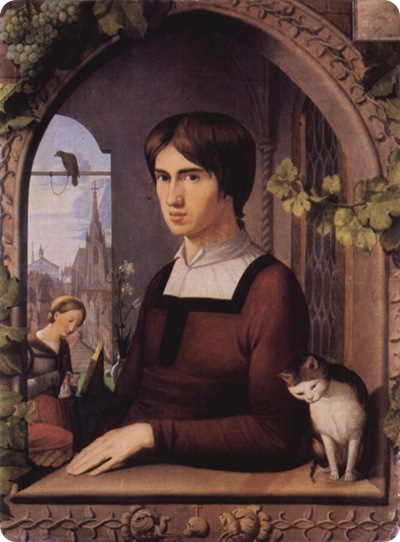 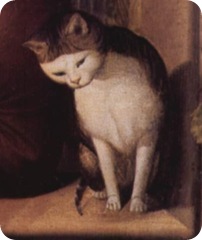 While in Rome he was joined by artists with similar views and they started a group that was given the religious name the Nazarene movement or Nazarenes. They even housed themselves in a religious building, the old Franciscan convent of San Isidoro. The group was also known as the the church-romantic painters or the German patriotic and religious painters.

No surprise then to see this kind on painting. From my point of view (a layperson) the paintings are highly polished (in terms of technical skill) but a trifle rigid and dull. The subject matter of the painting was a fellow artist who was a  member of the Nazarenes. Overbeck was apparently a mentor and therefore a senior member of the group.

Now to the cat. I must say that Overbeck was better at painting people than cats. Perhaps he had more practice on people or perhaps he didn’t spend enough time on the cat in the painting because it is not that well painted on a number of levels. And I am presuming that a good likeness was intended. Overbeck was into “precision” and hard outlines.

There would seem to be a degree of poetic license in the painting of this cat. The cat is slightly anthropomorphic. The legs are too thin, too straight and the feet (paws) too small. The markings are so unusual as to be almost impossible. The tip of the tail looks too narrow as well. As there are signs on the forehead of the agouti gene (causing the tabby coat markings), the cat would appear to be a tabby and white but the tabby bit is too well delineated and it follows the exact same line around the head and down the body. Obviously there was no concept of purebred cats in those days. Cats were simply cats but they were domestic cats. The year was 1810, the year that Overbeck came to Rome.

Cats do look a bit like this cat but rarely. And my guess is he got it wrong and employed a bit of imagination to finish it. After all the cat was not going to hold that position for long and there were no hand cameras in those days. The first photo was taken in 1826 by Niépce so cameras were rare and not hand held because of long exposure times.

From Portrait of Painter Franz Pforr to Cats in Paintings