A kitten in Poughkeepsie, New York is safe after becoming stuck in an underground pipe. While this is a happy ending story, it’s also a story about how differently dogs and cats in need of rescue are treated in this city. As it turns out, animal control in the city only responds to DOG calls. Kittens in need of rescue must depend on Good Samaritans.

It all started when a resident at a Poughkeepsie apartment complex heard the cries of a kitten in distress. After an unsuccessful rescue attempt was made the resident called Mr. Rooter Plumbing, who immediately sent employee Erik Sickler out to assist.

The kitten, now dubbed Piper, is estimated to have been stuck in the pipe for three days without food or water. First Erik had to place a camera inside the pipe to locate exactly where Piper was. He was then able to dig the pipe up, cut the pipe and rescue the kitten in about an hour and a half. Erik says it was difficult to cut through the pipe with a lot of people watching while at the same time working carefully so as not to harm Piper during her rescue. No one knows how Piper ended up trapped in the pipe except plain old kitten curiosity. 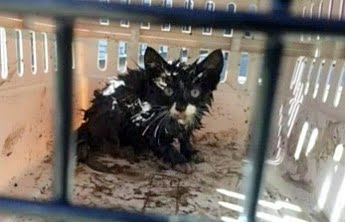 Piper was checked out at Arlington Animal Hospital and is now ready for a forever home through the organization Stray Help, a registered 501(c)(3) not-for-profit rescue organization that rescues and cares for stray and homeless animals, focusing on trap neuter and release for feral cats while providing humane education to the community. Piper’s four littermates were also rescued from this same area. All are up for adoption through Stray Help.

Stray Help depends on donations to support their organization. To make a donation or view animals available for adoption please visit their website, or call 845-489-2378.

Thank you, Erik. You are little Piper’s hero. As for Poughkeepsie Animal Control, BOO on you for not believing a cat’s life is as valuable as a dog’s.

A video showing more adorable images of Piper, along with her rescuers and her littermates, can be found here.