The Puma cat range is shown below in purple. The map is based on a Google My Maps map, carefully prepared by me from the IUCN Red List of Threatened Species™ map. The purpose of preparing this map is to allow people “on the ground” who have direct experience of the whereabouts of the puma (cougar, mountain lion) to either mark sightings (with flags) or to adjust boundaries if it is known that the puma occupies territory otherwise unknown. Or, as is more likely to the case, the map can be adjusted for reason that the range has shrunk. 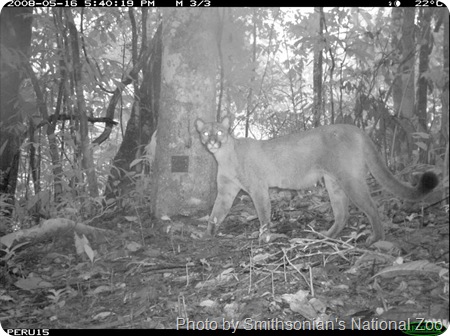 The books tell us the surprising fact that the range of the cougar is the largest of any terrestrial mammal in the western hemisphere. And when we look at the map this becomes apparent. The situation looks rosy for the puma. But I don’t think it is. Firstly, the range was a lot bigger. It used to extend from northern British Columbia and across the southern parts of Canada to New Brunswick. The range used to cover all of the United States. In South America, the range covered almost all of the continent (at 2002 according to Sunquist and Sunquist) but it has been relentlessly pushed back by human activity across its entire range through either taking the puma’s habitat, persecuting the cat or simply hunting it for sport. The puma finds refuge in the more remote areas (the west as can be seen from the map).

As to Florida, this isolated “island” range is probably nonviable as it is surrounded by the pressure of human development and the Florida puma has such a low population that it is inbred, which weakens the chances of survival (see Florida Panther). Although I think the Puma cat range is diminishing some people (please come forward!) believe that there are isolated pockets of puma populations that still exist in remote areas of what was once the range. In other words, the range has been pushed back, but not uniformly, leaving areas where the puma remains. Where are they? And is this true? If so please mark up these areas. It may be case that the sightings of cougars in these areas are in fact of escaped or released captive cats.

The puma (and the jaguar) is a top predator in the rainforest of the Amazon. However, unlike the jaguar, this cat can live in a wide range of habitats, from the desert to the rainforest. The large puma cat range is probably the major reason why it has so many names that tend to cause a bit of confusion. See Puma Cat the Name. From Puma Cat Range to Wild Cat Species.