A cat of many names, the Puma is also known as the Cougar, Panther or Mountain Lion. In general the size and coloration of the cat varies greatly across its range, which stretches from the south west of Canada down the western states of North America and throughout most western parts of the South American continent. In the north of its range and in higher mountainous regions the puma’s coat is generally longer to provide additional protection against the extremes in temperature – the color of the fur varies from slate grey, through yellow buff to light reddish brown. In appearance the puma has a small, broad head with small rounded ears, a powerful body with long hind legs and tail, which is tipped with black.

The puma can be found in varying habitats from the mountain forest, up to around 16,000 feet to lowland swamp and grasslands. In mountainous regions, were the cat follows its migrating prey as summer gives way to winter, the male puma can often patrol areas in excess of 100 square miles, although these will overlap the territories of several females who maintain smaller ranges. It is common for the puma to mark the boundaries of its territory with tree scrapes and sprays of urine which serve as markers and warnings to other puma.

The puma hunts alone, by day or night and will cache its food, if large enough, in dense undergrowth, returning to it over several days. Comparable in size to the Leopard, the puma is big enough to tackle larger prey such as domestic cattle and horses, for which it has earnt a bad reputation with livestock farmers, as well as wild deer, sheep, rodents, rabbits, hare and beaver. In hunting the puma uses the strength of its powerful hind legs to lunge at its prey with single running jumps that can reach in excess of 40 feet. 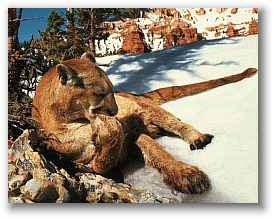 Although numbers have been greatly reduced by hunting and trapping the puma, in general, is not endangered. However one sub-species, the Florida Panther (P.c.coryi), only to be found in and around the state of Florida, has become endangered and as few as 50 or so of these cats now survive in the wild. Once found throughout the south-eastern United States, the range of the Florida Panther reduced drastically during the early part of this century and today the existing population is unlikely to survive for much more than 30 years without intervention. Although protected areas have been established, problems relating to the close proximity of human habitation are hampering conservation efforts – road-kills along the major highways, hostility of private land owners to the panthers and eating of prey contaminated with pollutants and pesticides all serve to aggravate an already critical situation.

The major problem confronting the Florida panther is one common to all small and fragmented populations of wild cat, that of lack of breeding success, due mainly to abnormalities associated with in-breeding. The State government has not been idle in its efforts to help save the cat – the erection of fences and under-passes along the major state highways has been carried out partly in a effort to reduce the incidences of road fatalities. To help in strengthening future generations a captive breeding program has been implemented with a number of young panthers being removed from the wild – these will be used to supplement the wild population in future years.