Is it time that we put feral cats to use rather than simply rounding them up and killing them? Well, that is not quite true as there are some wonderful people who actually want to do the right thing about feral cats but there are a lot of people who dislike what the nice people do! It’s a crazy world. A classic example is the Beverly Hills Municipal Code story.

So what am I talking about when I say lets put feral cats to use? I bumped into a story yesterday with the headline, Feral cats to be pest controllers (bbc.co.uk). I thought this sounded like (a) a good idea and (b) going back to ancient Egypt when the African wildcat was domesticated to keep down rodents. 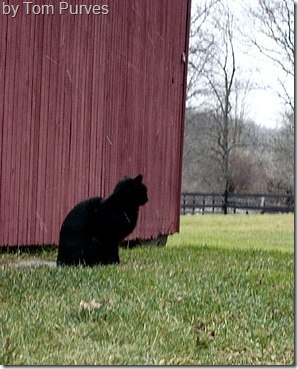 Or more recently the semi-feral cats of Maine, USA who were barn cats helping farmers. These became the world’s most popular purebred cats, the Maine Coon.

My next thought was, “how bad is the rat problem in the UK”. I was especially thinking of farms and the countryside because it seemed that here was an opportunity to ship feral cats in urban areas to put them to use as barn cats.

And, low and behold, the Think Wildlife website has a page on The Problems with Rats. I’ve just built a page on human food for cats that features a photo of a feral cat eating a rat. Why can’t we better use feral cats to keep down the rat population rather than killing them and rendering them down for cat food (it does happen)? I am constantly told that urban feral cats eat out of rubbish dumps. That is because the canny rat is to difficult to catch, I suspect.

But on farms I have a feeling things are different. And the underlying benefit that goes beyond helping feral cats and farmers is that you don’t have to use nasty poisons and chemicals etc. to kill rats. When a cat kills and eats a rat the whole process is natural and extremely environmentally friendly; a very topical subject at the moment (16th Dec. 2009) with the failing Copenhagen conference on climate change in full swing.

However, I am certain that somewhere there is some hidden (probably commercial) reason why it is not possible or will not work. If that is the case I’d like to hear about it (comment, please!). I can think of one. Farmers don’t like the idea! Maybe it should be obligatory, a regulation that is handed down from above (local government).

The idea is supported by the BBC story, which describes the efforts of Cats Protection in Bournemouth who trapped and neutered about 20 local feral cats and are now trying to rehome them with famers or rural people. I hope people come forward. Perhaps they won’t. Perhaps we have got to used to the idea of using convenient chemical but environmentally unfriendly methods. That is the way of the world. 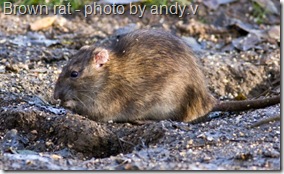 As to rats the Think Wildlife website says that the “problem” is getting worse. They refer to the Norwegian Brown rat as the major culprit. Of course on an absolute assessment the rat is much less destructive than the human but that is another story. Rats for example can contaminate animal feed with their urine.

At the time that cats were beginning to be domesticated in the world there was, it seems to me, a better overall balance in the relationship between human and cat. Sure, there are some wonderfully well kept and cared for cats in the world today but far too many are not or are abandoned. I am constantly surprised at the size of the feral cat population particularly in the USA (2 - 14 million - we don’t know how many - are deliberately killed each year so there must be much more alive). In the beginning the cat was utilitarian, which created a balance.

We should seek a better overall balance in our relationship with the domestic cat and one way is to put the feral cat to use rather than to sleep.

Put Feral Cats to Use -- photos -- all are published under an Attribution 2.0 Generic creative commons license. All have been cropped as allowed under the license.