Ragdoll cat rescue – I think not for this cat. This cat could not be better cared for and loved by Dani & Rick Photo of Ragdoll cat Myst © Dani Rozeboom

We know, most of us, that a cat is for life, to use a well worn cliché, but a very true statement nonetheless. There are occasions though when a person has to give up his/her cat because of circumstances beyond their control such as illness or age. This is when rescue centers step in and sometimes the breeder who “sold” the cat in the first place can help. The Ragdoll, as we know, is a purebred cat. Well sometimes he/she might not be purebred but if she is, a purebred cat rescue center would be an option in addition to the specialist rescue groups that I have listed below. Click on the link to go to a page dedicated to Purebred Cat Rescue.

Here is a list of Ragdoll cat rescue groups/clubs/center/organizations Remember, this list is good at May 2008. Some groups may disband in the future and the links become ineffective:
UK

– link broken early November 2012. Sorry.
Located in the UK and the number one Ragdoll cat rescue organization, it seems to me. Established since 2004 they are active and have a nice website. They also accept cat breeds other than Ragdoll cats as they can call upon a network of friends and colleagues in the rescue world. They are a registered charity, the only one dedicated to the welfare of the Ragdoll cat. In the USA it is more usual for rescue organizations to be registered charities.

The strength of this community is that it is active and the website shows this with recent additions. This is an indication of its usefulness. They have enquiries asking if the Ragdoll is hypoallergenic. It isn’t (I don’t believe any cats are). The charity is run by volunteers.

The British Ragdoll Cat Club ****
Once again located in the UK (as the name suggests). Formed in 1987 and affiliated to the GCCF. They make a rather startling yet pleasant statement. In the 20+ years that they have been in operation their rescue and rehoming service has only on a single occasion had to deal with an actual rescue. This is great for the cats and it probably means a good job done by the breeders in selecting the right applicants. It is bad news for those seeking to adopt a rescue cat, however.

They have, though, been asked to rehome Ragdolls (I guess in an orderly manner as opposed to rescue) so it might be worth giving the person in charge a call (as at May 2008 these are the published details:Glyn Davies on 01442 381509).

The Ragdoll Rehome Group
Once again a group of volunteers serving the UK.

In addition, The Traditional Ragdoll Cat Society is a club dedicated to Ragdolls from 100% original and traditional pedigree lines – be they Old English, American or a mixture of both. They also have a very active rehoming section, and deal with a great number of cats requiring new homes. We have never had to directly deal with a Ragdoll cat rescue case. Our Rehoming section is very much our own, but we do work together with the Ragdoll Rehoming Group. By pooling their resources and knowledge they are able to ensure that they find only the best homes for any Ragdolls (or part-bred Ragdolls) that come up for rehoming.

(thanks to Candice Prowting Genetic Historian and Breed Registrar, Traditional Ragdoll Cat Society for help in preparing this section – I have used her own words where appropriate).

The Old English Ragdolls are descended from the original twelve Ragdoll cats imported from the USA in the 1980s.

Progressive Ragdoll Breed Cat Club
This is a club less involved in Ragdoll cat rescue than the ones mentioned above (I think I am being fair in saying that) but they do list an older cat for rehoming on the link. I don’t know how recent it is but there it is. UK based. 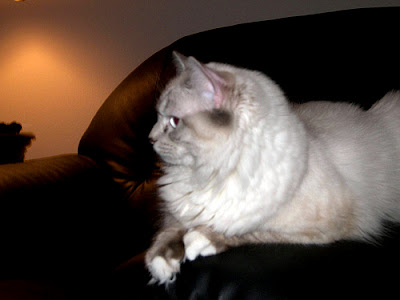 Yahoo Groups, I feel, are an invaluable way to meet people all over the world who have a common interest and you can learn a lot about what is going on in the Ragdoll cat world including Ragdoll Cat Rescue. There are 14 groups listed and I have spent a little time selecting the following as the best based on size of membership (important) and what they say in their resumé. Their area of operation is not always clear so you’ll have to explore. All work is on a voluntary basis and I am sure most if not all need volunteers at any one time to foster, transport and fundraise for those lovely Ragdoll cats.

You would need to join Yahoo and the group but some have public messages which I guess anyone can access.

Ragdoll Rescue (link) ***
Concerned with purebred and ragdoll-mix rescue (they call them wannabe Ragdolls). They were more active in 2003/4 but have a large membership. Don’t know area of operation, possibly USA.

Ragdoll Rescue USA Adopters (link) *
Clearly USA based. However, a low level of messages so not that much activity.

Ragdoll Rescue USA (link) ***
Looks to be nicely active and seem to cover all of USA.

There are more but some are less effective than others.