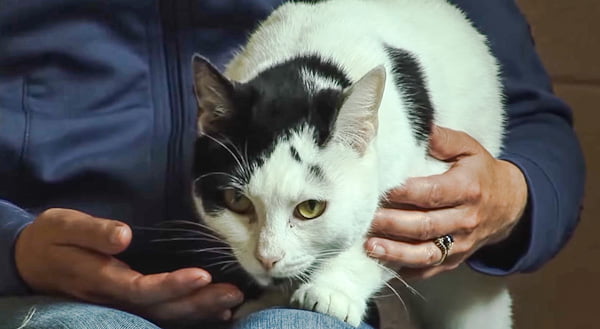 Note: there are a lot of interesting comments at the base of the page.

Reiki for cats is perhaps not the most well-known alternative therapy for felines. It is, however, much appreciated and enjoyed by some cats. One of the best things about reiki for cats is that it is a therapy that the cat herself can actively accept or reject. Just as cats can choose to use a magnetic cat bed or to ignore it, they can – or at least they should always – be free to choose to stay and receive reiki offered to them, or to simply walk away (in the case of a hands-near, i.e. “hands-on” or “hands-just-off” treatment), and similarly they can choose to accept or not to accept reiki offered to them by distant healing.

For the benefit of readers who are not familiar with reiki, this is a form of “energy healing” that is either given “hands-on”, meaning on or just above the person or animal, or by distant healing for which practitioners sometimes use a photograph of the intended recipient – but do not always need to do so. Reiki treatments on people do not require clothes to be removed and may also be given through a light covering such as a blanket e.g. if the person is lying still for up to an hour where he or she might otherwise feel cold. Reiki can also be offered to animals, the most commonly written about examples being dogs (reiki for dogs), cats (reiki for cats) and horses. The word “Reiki” is from the two Japanese words rei and ki, whose meaning has many translations including “life force” and “universal energy”. In short, it can be explained as a way of offering healing energies / life-force, with best intentions for the recipient, while understanding that healing can take many forms which do not always lead to a complete physical cure or recovery. In some cases, healing energy is said to ease a smooth and peaceful passing if and when it really is time for the person or animal to move on from its present form in this life. (Whole books are available about reiki, reiki for animals, and probably even reiki for cats. This is just a very brief introduction.)

I am submitting this article in appreciation of reiki, cats, and reiki for cats. As a qualified therapist who has experience treating people using massage, reflexology, and other therapies including reiki, I have worked with reiki over many years – helping not only people but also various animals from horses to fish, to wild birds. People who have never had a reiki treatment often ask what it will or might feel like. People who are considering participating in a course to learn reiki themselves often ask what it feels like to give a reiki treatment, both through one’s hands (and sometimes feet) and also over a distance i.e. remotely. Suffice to say here that the answer isn’t simple. There isn’t just one sensation, just as there isn’t just one technique used to give a good full body massage. However, one can certainly feel the flow of reiki, in some cases more strongly than in others. For example, sometimes it can feel like a strong “pull” through the centre of the palms of one’s hands – as one might imagine feeling if strong suction “suckers” were attached to the centre of each palm and then pulled, perhaps with uniform pressure or perhaps with some faint pulsing pressures. When one has experienced this and come to recognise it as only occurring when one is intentionally offering reiki and is aware of it being accepted, the sensation is unmistakeable. What does this have to do with reiki for cats?

My personal view is that, whenever possible, it is better to respectfully offer help to animals rather than to “provide” it forcefully; wanted or not. However, it can be difficult to communicate and then understand their response to a request for permission. One example from earlier this year concerns an elderly cat who had started scratching the sides of her jaw so ferociously that she broke the skin on her face, caused bleeding and seemed thoroughly distressed. A vet recommended removal of most of her last few teeth as it seemed they might be the source of discomfort. Unable to objectively consult our feline friend, we booked her in for a next-day dental treatment under general anaesthetic opting for all the recommended “extras” which included various pre-anaesthetic checks and being kept on a drip for the rest of the day, so all-in-all, several hours at the vets after awaking from the procedure. This particular cat has a huge love of company and attention and a correspondingly strong objection (!) to remaining in a cage on the ward at the veterinary surgery. Despite talking about the possibility of keeping the cat in overnight during her first “your cat has come around from the anaesthetic and is ok” phone call, the vet called back hours later to say that said cat friend was “very upset about being here” and perhaps we’d better pick her up as soon as possible. Our much-loved and now poor, dazed, (near) toothless cat friend was certainly very pleased to be home.

Now I’ll get to the point: Regardless of what I tried to do that evening – when she was, of course, going to have my close attention anyway – she determinedly pushed her way under my hands. In case you’re wondering, that prevents one from typing or reading books or magazines – in fact most things except watching TV. The interesting thing is that although I had not used reiki to give hands-on treatments for a long time when this happened (having changed jobs and now being mainly office-based), the reiki “switched-on” powerfully. I can’t prove this to anyone, nor have I any need to. I certainly felt it and the cat definitely wanted and received it. I have not experienced an animal pull so much reiki so spontaneously and “on request” before or since. That said, I have certainly experienced other animals successfully seek it out in this way and stay for as much as they wanted. The cycle of this cat seeking out as much “reiki for cats” as she wanted continued for a few days. Obviously, she received all the usual fuss and attention plus adherence to the vet’s instructions as well.

As I understand it, strictly speaking, only vets are allowed to treat animals. In the case of reiki for cats, a reiki practitioner is not really treating the cat but simply facilitating flow of universal energy to the cat to the extent that the cat requires and accepts it. So, in “medical terms” the cat chooses the “treatment” (or not) and, if so, also “prescribes” the “dose”. It is nice to be wanted, nice to be helpful, and, of course, it is harmless to have one’s hands gently near to cats who find their way underneath them to be comfy. Reiki for cats can be as simple as that.

The elderly cat made a quick and complete recovery from the dental treatment – as confirmed by the vet who checked her over about a week later. Since then, she’s been eating at least as much as before and is very well indeed. These events had quite an effect on me, as I had not used reiki for a while before they took place. However, they should have come as no surprise at all because it was largely due to reiki that the cat found us in the first place – but that is another story.

Late addition – a video which may add to the page: