↓
Home→Feral Cats→trap-neuter-release→Result! Trapping of LA feral cats called off because of pressure from concerned cat lovers

It’s been a SUCCESS: concerned cat lovers came together via Facebook to put a lot of pressure on the property management company, ‘Related’, for Plummer Village in LA, which is the area where Barbara Yabor’s feral cat colony lives. The result is that they have decided to put a stop to the planned trapping of the cats. Barbara says “it was called off for the time being, Michael”.

This appears to be a moment when the company reappraises what is going on. ‘Related’ became the new managing agents for the property development on 25 July 2018. I suspect that the pressure to put a halt to the plan came partly from the potential complications that they might encounter. They had a license to trap cats and cat owners were warned but if someone’s domestic cat is trapped and subsequently euthanised due to errors it’s not only cruel but very bad publicity for a business that wants to build relationships with home owners and renters.

Related state: “We are sensitive to the needs of our residents…”

Well it seems that they have listened. Barbara told me that Related were inundated with phone calls. She told me that the “phone was ringing off the hook.” So it was pressure and lobbying from supporters of feral cats brought together via Facebook and my website PoC. 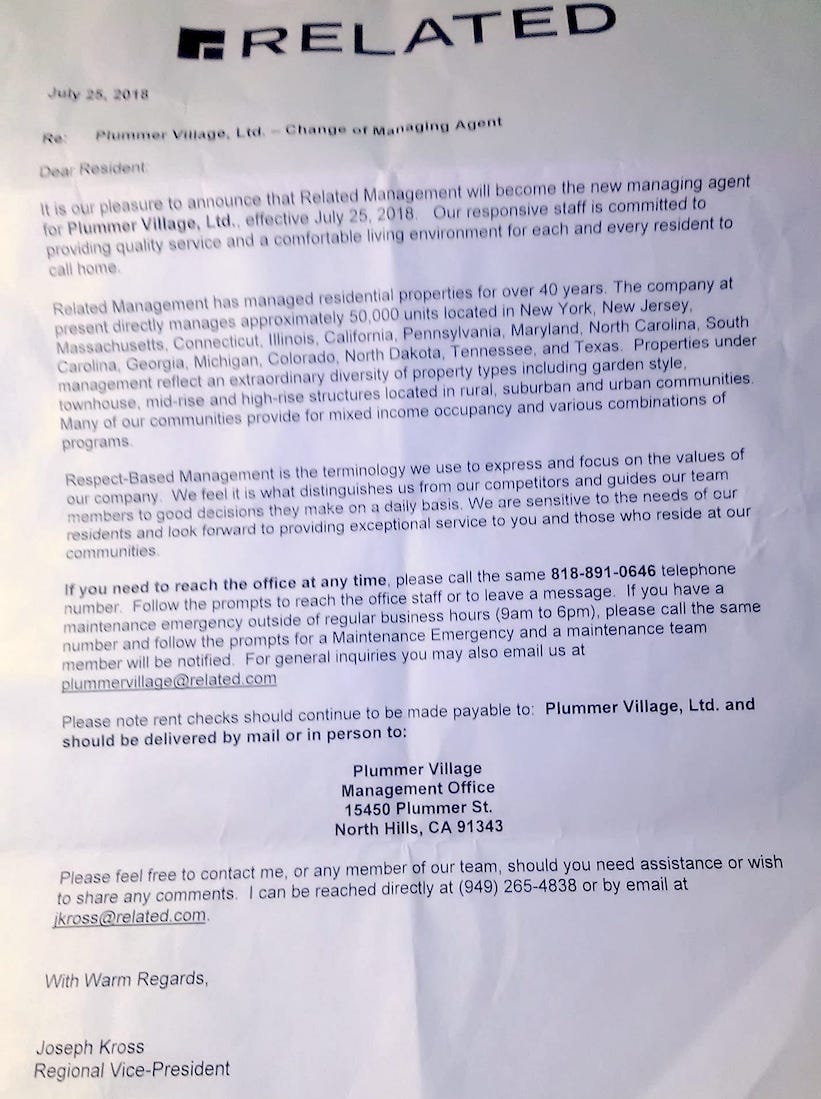 Barbara mentioned that “Wendy Middlerider is an angel”. Apparently she talked to the regional manager (believed to be referring to Joseph Kross) of Related and he had no idea what was going on regarding the trapping of 12 feral cats. It appears that he was enlightened by Wendy.

The big question for the future is whether a permanent stop can be placed on the trapping.

Please watch this space for further updates as things develop.

My thanks to Barbara Yabor and all her supporters and supporters of feral cats.

Source: the information comes direct from Barbara Yabor. If anyone can assist in the details or wishes to make corrections, please leave a comment and I will take prompt action. Thanks.

Plummer Village is on the northeastern edge of Metropolitan Los Angeles.