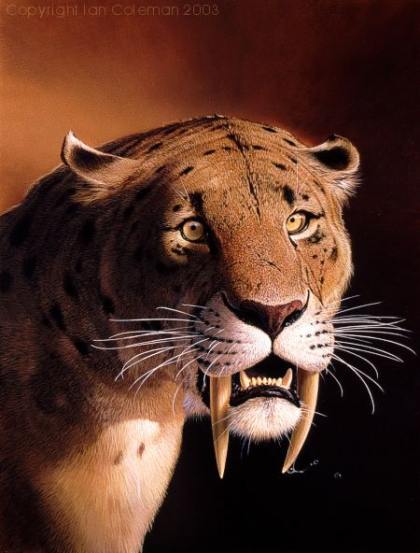 Saber Tooth Tiger – photograph and artwork are © copyright
Ian Coleman published here with his permission.
You can see the superb wildlife art of Ian Coleman by clicking on this link: The Wildlife Art of Ian Coleman

The Saber Tooth Tiger (Saber is spelled Sabre in the UK) became extinct some 10,000 years ago. The White Siberian Tiger is very nearly extinct today. The tiger generally is under a great threat of extinction. The world is hostile to the tiger. We are looking at the possibility that, one day, we will see the tiger as a curiosity in a zoo, or worse as a zoological exhibit as illustrated below, rather than as a magnificent and proud wild animal gracing this planet with his/her presence as part of nature. The Cheetah is another fine wild cat that faces a similar fate unless there is real and committed action to save her. The time has come to stop analyzing and talking and to start doing. 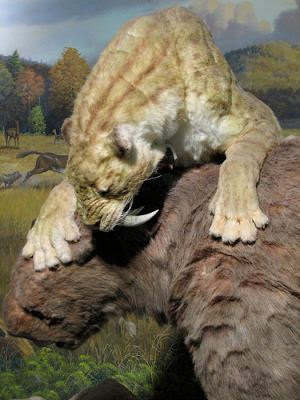 The Saber Tooth tiger is not a tiger. The name has been given to this cat because this cat looks like a tiger with large canine teeth (maxillary canine teeth) that resemble sabers (sabres in UK English). A saber is a type of sword. In the Star Wars film series Light Sabers were used. Humans have canine teeth, which are longer than the other teeth.

This extinct animal is part of a group of similar animals called Saber Tooth tigers (a genus) that lived from 2.5m to 10,000 years ago (late Late Pleistocene period, which was from 1.8m to 10,000 years before the present day). The scientific name for this group of large cats is Smilodon. In terms of scientific classification, the genus Smilodon was part of a larger extinct group of animals called Machairodontinae, which in turn were part of (a sub-family of) true cats (Felidae). The modern day tiger is scientifically classified as part of another sub-family of true cats named Pantherinae.

There are other extinct saber tooth animals. Although, The most famous is the Saber Tooth Tiger. These cats lived in South and North America, specifically Argentina and California but they actually inhabited much of the Americas. (src: http://www.ucmp.berkeley.edu/quaternary/labrea.html).

The first cats existed some 25m years ago. Recent research indicates that the common ancestor for all current cats lived some 11m years ago. The Saber Tooth Tiger populated this planet at the same time as the other current large wild cats such as the Cheetah, which may have originated in the last 2-4 million years.  The same Cheetah we see now would have existed at the time the Saber Tooth Tiger existed. This cat is not long extinct (src: http://www.bioinquiry.vt.edu). They co-exited with other big cats in Africa. In North America they co-existed with the Cougar, American Lion, Jaguar and American Cheetah. 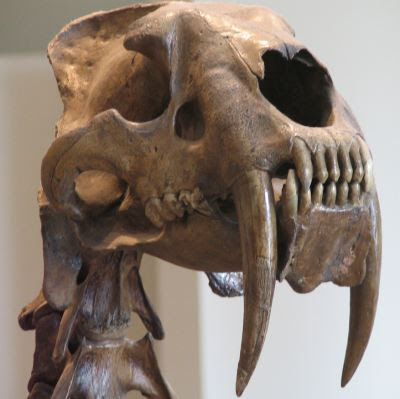 This cat was one of the largest felids (meaning a cat, being a member of the Felidae or family of cats), see the weights above.

How the saber teeth were used is still debated. They were long and prone therefore to breakage and damage. The largest of this genus had saber teeth about 7 inches long (17 centimeters). It has been argued that the strength of bite of this cat was much weaker than the modern big cats. This would have impacted on how it used its teeth.

This cat was not as agile nor as lithe as the modern day big cats. The limbs were shorter and stronger. This animal was built to pull down prey. Prey would have been similar to that of todays big cats namely deer (see Wild Cat Species). They also preyed on ground sloths (see picture above) including, in America, Elk, Bisson and American Camels.

As stated, it is thought that this cat used upper body strength to pull prey down and then used the famous saber teeth to cut the jugular vein (the major vein, which carries deoxygenated blood, from head to heart) in the throat or to cut the trachea (wind-pipe or airway). This would have resulted in less likelihood of damage to the teeth.

Fossils (see below) indicate that this cat roared like todays big cats (due to the presence of hyoid bones). Research also indicates that they may have lived in groups (but this is disputed) supporting each other, when required, unlike modern tigers but like a lion’s social structure. (src: http//www.ucmp.berkeley.edu). 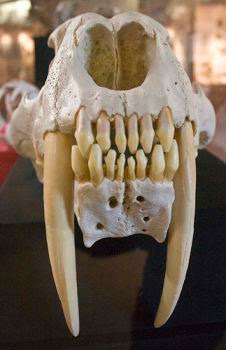 The fossils of this extinct cat are the second most common discovered in the Rancho La Brea Tar Pits, Los Angeles, an area where tar (asphalt) pits, caused by oil seeping into the ground, have preserved the skeletons of these ancient creatures.  The remains of thousands of individual animals have been found at this location. They were probably caught in the pits hunting prey that were also trapped there.

Being so numerous, fossils of this animal have been adopted as the California State Fossil and named Smilodon Californicus. It is considered by some people to be a separate Smilodon but is probably simply a separate sub-species (a sub group within the species Smilodon fatalis). All but 6 of the US States have State fossils.

The reason for the extinction of this genus of cat is in dispute but can probably be put down to one or more of the following (src:http://answers.yahoo.com and myself):

1. The end of the Ice Age some 10,000 years ago (9-13,000 years ago) resulted in a change in the landscape making it less suited to the Saber Tooth Tiger and other animals upon which it preyed. What happened at this time had a large impact on numerous species of animal and it has been named, “Holocene extinction event”. The Holocene is the latest epoch (epoch = a defined time span). The event resulted in the extinction of mammals, which scientists call megafauna.

In terms of geologic time scale, this event was short lasting for several thousands of years (the Earth is about 4.5 billion years old). The mixture of forest and grassland suited to the Smilodon would have changed to open grassland and less forest. This was unsuited to Smilodon’s hunting skills being a relatively slow mover. In addition the landscape dried out reducing the amount of wildlife to support the larger animals. Without prey or the skills to hunt effectively in the new landscape the genus failed to survive.

2. Humans hunted it and/or its prey. The growth of the human population about 10,000 years ago was the sole, main or contributory factor in the extinction of the Saber Tooth tiger.

Hunting is still the main reason for the gradual extinction of tigers today only it is called poaching and the reason (in the case of the White Siberian Tiger) is tiger body parts to supply the bogus Chinese medicine trade.

Another possibility is that humans infected the Smilodon with a virus that was new to the animal and therefore unable to combat.

Saber Tooth Tiger to Cheetah Facts
The cartoon picture has been cropped as allowed in the type of creative commons license granted.
Sources:
Please comment here using either Facebook or WordPress (when available).