Today, 21st November 2013, I visited the first lady of the cat internet world and self confessed science-oriented geek, Sarah Hartwell. Her cat site: Messybeast.com was one of the very first general cat websites on the internet and was online at about the time the public internet was starting or, at least, beginning to get going. Messybeast is one of the originals.

Before I go on (I’ll write some more tomorrow when I have more time) here is “Mr. Minns”: 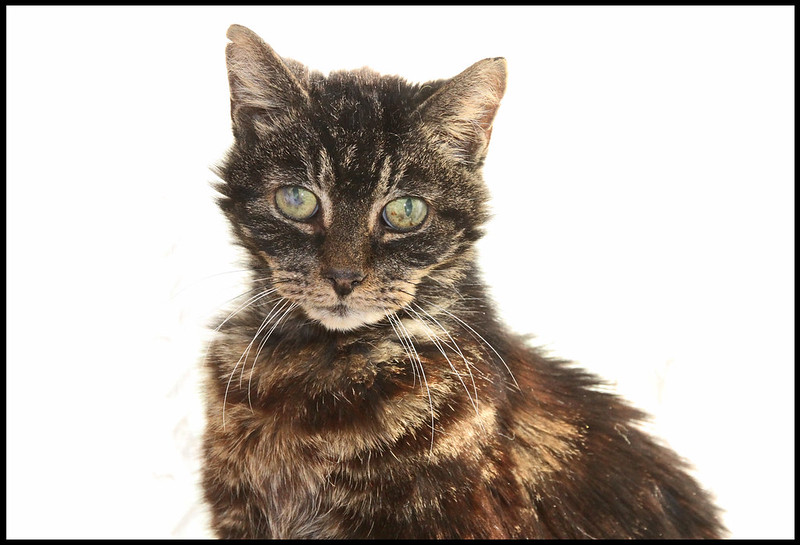 I like this photo that I took of Mr Minns because he is old and fragile. The style of the photo is quite “fragile” as well – in tune with the cat. The background is bleached out. It was taken against some white net curtains. Sarah recommended I use fill-in flash (she is quite a photographer herself) and the result, I believe, reflects the character of this old cat. He is quite frail, really. I immediately liked him and I think he liked me in return. He suffers from hyperthyroidism. He is quite boney and you can see his right eye is a bit cloudy and he has what I would call “age spots” in his eyes (brown spots).

At one time Mr Minns was called “Minnie”. He is one of those cats that “just happen” as Sarah says. They just turn up and you have to adopt them if you love cats. I think Sarah told me she found him under a bush and before she could discover his gender gave him a female name “Minnie”. This evolved into Mr Minns when she found out that his was male. She occasionally elaborates on the name as I tend to do with Charlie.

Sarah has no air and graces. It is about cat meets hard science and it is great. It is very refreshing to meet a cat lady who is so scientific and absorbed with discovering hard facts about cats and presenting them as objectively as possible. She is also one of the country’s leading experts on cat genetics.

Tomorrow I’ll do another post about Sarah with another picture of Mr Minns and her other cat.