As at early March 2009 the results of the Scottish Natural Heritage (SNH) Scottish Wildcat Survey is due to be published. The survey began in 2006 and this short article is based on a report by Adrian Davis with the intention of spreading the word about this rare, elusive and fiercely independent wildcat. The Scottish Wildcat is the only cat that is native to the British Isles. Its severe decline in the 19th century was due to persecution by us and deforestation – sound familiar? The very same things are still happening in the world in relation to the wildcat, particularly the larger ones. We in Britain have little right to criticize other nations for failing to protect the wildcats but we can and I do report on the status (dire generally).

By 1862 the Scottish Wildcat was lost to England and Wales and the population decreased in Scotland as well during the 20th century. This cat found a sanctuary of sorts in north east Scotland (marked dark green on the map). 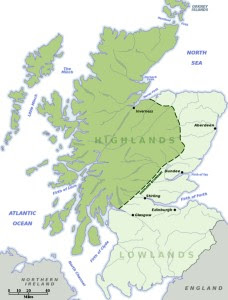 The current threats to this wildcat are:

The Scottish Wildcat Survey asked for people to help in identifying this cat in order to assess numbers and in assisting in that task produced an illustration as to the differences, which I have taken the liberty to reproduce here. Although the survey is concluded and the report due, it is clearly useful if all of us are aware of what is and what isn’t a Scottish wildcat. They do look similar to a cobby, large domestic tabby cat. The blurring of the boundary between the wildcat and the domestic cat is made more opaque by hybridization; some cats will be a mix of domestic cat and Scottish wildcat. Here is a very useful image showing the differences: