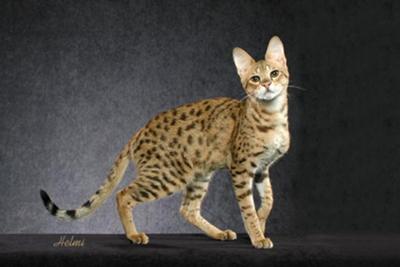 Here is a short video of a very tame wildcat the Serval playing with the Flicks. He was in a large enclosure at A1 Savannahs, the famous cat breeder of Savannah cats. His behavior was very much like that of a much smaller domestic cat. It's just that everything is bigger and stronger.

When I played with him he smelled the area near my watch and chewed on it! The watch is quite expensive but I let him! Like all cats he was very "smell orientated" and the area under my wrist watch was a little more sweaty.

And it seems that Servals like to play around feet (witness this Serval playing with Ken Flick's trainers - he even hisses in excitement when he smells them!). Cats use their sense of smell much more than we do. It is almost more important than their eyesight.

The A1 Savannah experience was a kind of sensory overload for me (I was accompanying the Flicks when visiting the cattery). There was much to see and do. The cattery is in Oklahoma farming country near Ponca City. The land is flat. It is the land of the Native American, the Ponca Indians who were forced to relocate to Oklahoma from Nebraska by the US government at great loss of life to the Ponca. A1 Savannahs which is a farm of about 40 acres is on Native American land and surrounded by it. The neighbors of Kathrin and Martin Stucki are Native Americans of the Ponca tribe.

There cattery is large and successful, full of activity with other animals on the farm as well including a wild pig. Kathrin has a long history of training and dealing with animals and she can talk to the pig in the pig's language. She makes a guttural pig like sound with her mouth closed. It is very effective.

Martin Stucki is highly organised in working at the cattery. He knows the breeding process inside out and with Kathrin is a leading authority on Savannah cat breeding.

We stayed about 3 hours and had lunch there. It was an experience that I will clearly remember for the rest of my life. Ken and Helmi Flick enjoyed the stayed very much as well. And for me the Serval playing with the Flicks was one of the many nice moments. You might like to see also: Kathrin Stucki of A1 Savannahs and Socializing Wildcat Hybrids.

From Serval Playing with the Flicks to Helmi Flick cat photography