Simon the cat was a ships cat on HMS Amethyst during the Yangtze incident 1949. I discuss this gorgeous little black and white cat more below but would like to clear up a Google confusion. Today, there is an extremely well known cat that features in cartoons created by an Englishman. This cartoonist’s name is Simon. The cartoons are called “Simon’s Cat”. Google gets confused between a cat called Simon and a person called Simon! Google is great but there is room for improvement. This page is called Simon the cat to try and tell Google that it is about a cat called Simon.

Simon is a standard black and white moggie mouser ships cat. No more no less. But he is the only cat to have won the animal equivalent of the human Victoria Cross, the highest military decoration for valor in the face of the enemy to members of the armed forces in the UK and commonwealth countries and territories of the British Empire. The beauty of the story is the “ordinariness” of the cat and the extraordinary behavior (in the eyes of people lets not forget). 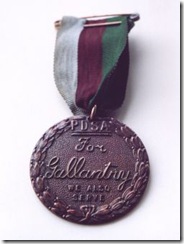 The award Simon won is the Dickin Medal which is awarded to animals for conspicuous gallantry and devotion to duty while serving for the armed forces. Sixty Dickin Medals have been awarded since its inception in 1943 by Maria Dickin CBE who founded the PDSA a large animal charity employing about 1500 people. The citation reads as follows:

Date of Award: awarded posthumously 1949 : “Served on HMS Amethyst during the Yangtze Incident, disposing of many rats though wounded by shell blast. Throughout the incident his behaviour was of the highest order, although the blast was capable of making a hole over a foot in diameter in a steel plate.”2


Simon served on HMS Amethyst, a ship about the size of a destroyer as a rat catcher. He found his way on board when a member of the crew spotted him in Hong Kong. At the time he was smuggled on board he was sickly. He endeared himself to the crew and kept the rats down. He was caught up in the Yangtze incident on April 29th 1949. The Yangtze river is in China. The ship was fired on… 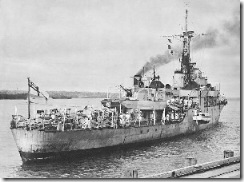 acknowledge any treaties between the previous Chinese government and British, they insisted that it was illegal for Amethyst to cruise in the Yangtze river. And the Chinese insisted that they were fired on first (later admitted to be a fabrication)3.


The ship was bombarded by field guns on the shore that hit the ship 50 times and caused severe damage. The shelling killed 22 and and wounded 31. The award was made posthumously (after Simon’s death) and after the incident. Simon was, in fact, wounded by one of the 50 shells that hit the ship. The blast that injured him made a hole a foot diameter in steel plate. Four pieces of shrapnel were removed from him. He survived to continue his duties which included boosting the morale of the crew.

Simon was regarded as an exceptional cat because he was able to function normally under such horrendous conditions for both human and cat. But was he actually exceptional? I am sure that many a cat would behave similarly. Cats are very tolerant of pain and extremely uncomplaining.

He died shortly after returning to England as a result of an infection while in quarantine. The entire crew of HMS Amethyst turned out for the funeral and hundreds of others.

From Simon the cat to PoC Forum

1 I argue fair use on the grounds that it is published for education and charitable purposes in small format and on the basis that the photographer or copyright holder is unknown. Also: where no free equivalent is available or could be created that would adequately give the same information it use it is argued is fair use.

2 Wikipedia® extract (modified) as allowed under their license

3 Wikipedia® extract (modified) as allowed under their license

Simon the cat, the photos of the ship and medal: this are copyrighted and published under fair use as above.