The title, 'smallest cat in the world' is a search phrase. This page answers the question as at April 2010. The search phrase implies that people want to know the current world's smallest cat. The Guinness World Records organisation (GWR) do not list such a record at 2010. This is probably to avoid people trying to get the record and abusing cats as a result. Also there is the difficulty with the age of the cat. This may be a newish policy change. In the past there was a record for the world's smallest cat run by GWR but it was probably stopped for the reasons stated.

Young cats are small. In scientific parlance, sub-adults are smaller than adults. And the world's smallest cat should apply to a fully grown adult cat. This might be hard to establish even by a qualified person. This casts doubt on the viability of running such a record.

Despite that rather negative opener, there are some websites that tell us which cat is the world's smallest.

CatWorld.com says that the Guinness Book of World Records awarded the title to Mr Peebles. This diminutive cat from Central Illinois in the USA was 2 years old when he weighed around 3 pounds. He is 6.1 inches long. His smallness was inherited apparently. This is around the weight of the smallest teacup and miniature cats. 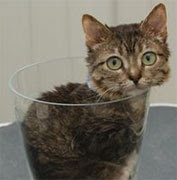 I have no idea when this record occurred or if Mr Pebbles is still alive. It must have been around 2006. On another site (waleg.com) it says that Mr Pebbles had a tough early life because he was small (odd that don't you think?).

He was then adopted by Dr. Donna Sassman. The good doctor feed him four times daily to keep his weight up and she thought he had probably peaked on weight. That means though that he might not have peaked.

Hubpages.com say that a cat called, 'Bitsy' is or may be the smallest cat in the world and that it is verified by GWR. There is no date to the posting.

Bitsy allegedly weighs 1.5 pounds yet is one year old and 6 inches long. This is half the weight of Mr Pebbles. This is probably an unsustainable weight but I am no expert. The video shows him with a slight head wobble when crouched down. Personally, I don't like this video. It is insensitive to me.

There is a video. I hope it still works:

The world's smallest wild cat species is the rusty-spotted cat. This small wildcat has a weight range of between 0.8 and 1.6 kilograms. This is 1.76 pounds to 3.53 pounds. There may be an individual rusty-spotted cat that holds the informal and unrecognised record of the Smallest Cat In The World.

Here is a table showing some weight comparisons:

Note: the picture or Mr Pebbles is presumed to be in the public domain. If not please tell me.

Smallest Cat In The World to Largest Domestic Cat Breed