What is the difference between Snow and Silver Bengal cats? The underlying answer is in the genetics together with a subtle difference in appearance. Snow Bengals have a ground or base color that are varying shades of cream, ivory or light tan instead of the warm color that we usually associate with this cat breed. Snow Bengal cats are derivatives of the Siamese Colorpoint. Early on in the development of the Bengal cat breed, litters thew up, from time to time, white kittens indicating the presence of the same gene that produces the Siamese colorpoint appearance. The gene that produces this is recessive. This would, it seems, further indicate outcrosses with Siamese cats in the early days before outcrossing to other breeds was restricted or prohibited. These early Snow Bengal cats were called "Seal Lynxpoint" Snow Bengals. These cats have blue eyes and are called Blue-Eyed Snow Spotted or Snow Marble Bengals.

Contrast between the pattern and background is important for Bengal cat breeders. In an effort to produce a snow Bengal with a more vibrant color and greater contrast between the ground color and the spots or marbled pattern, two breeders in the late 1980s (Gene Johnson and Bob Dundon) introduced the Burmese into the breeding program. This was the development of the "Seal Mink" and "Seal Sepia" Snow Bengals. Once again the gene is recessive. There are now three divisions of Snow Bengal cat that incorporate the Seal Lynxpoint, Sepia Mink and Seal Sepia colors. The foundation cat for the Seal and Sepia Mink is Nola Kotton Pickin of Gogees. The patterns for these three types of Snow Bengal cat can be either spots or marbled.

Reflecting the fact that the genes involved are recessive, in order for a kitten to be a Snow Bengal both parents need to carry the lynxpoint/colorpoint gene or the sepia/Burmese gene. 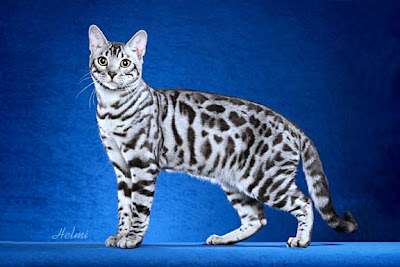 The outcrosses, genetics and appearance are different for Silver Bengal cats. The outcrossed cats were/are Silver American Shorthairs and Egyptian Maus. The gene involved is the inhibitor gene, a dominant gene that inhibits the production of yellow pigmentation in the hair strand. The appearance is as described and as can be seen, a clear steely silver ground color rather than a creamy or ivory color. See a bit more here: Silver Bengal cat. It would seem that one difference between Snow and Silver Bengal cats is that it is easier to create greater contrast between the pattern and ground color in Silvers.

Underpinning all Bengal cat breeding is the desire to match the wild look of (in this case) the Snow Leopard, small ears, puffy whisker pads and a thick tail.