This page is about snow leopard cubs and the wider topic of reproduction and development. The sources are Wildcats of the World (the No.1 reference work on wildcats) and as mentioned in the text. 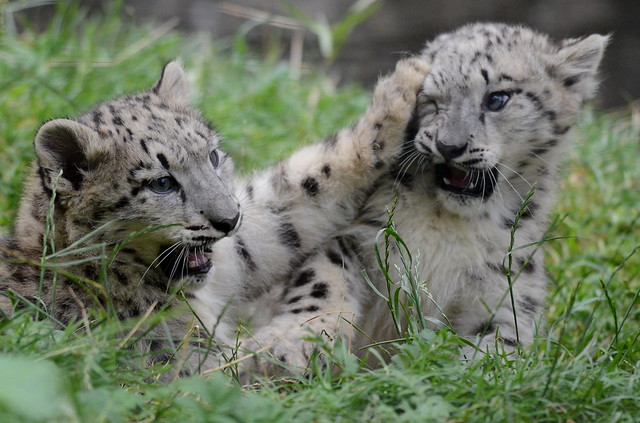 Estrus (the period during which the female is sexually active), which is thought to last for between 2-12 days, peaks in late February. During this time she makes loud meows at night, which can be heard by the local shepherds. On this basis, it is thought that snow leopards in Ladakh (see map below) mate during late March to April and in Nepal during March. The narrow window during which the female is sexually active and the fact that all females are in estrus at the same time means that the male snow leopard cannot successfully inseminate a number females due to male competition, which in turn precludes the need for a male home range that is large and exclusive and which overlaps that of several females. As a result the male home range overlaps more than usual with that of other males. Gestation (the period of pregnancy) is 94-103 days. Litter size is 1-5 snow leopard cubs. The average litter size is 2.2 snow leopard cubs.

Snow leopard cubs are normally born in a rock cave or crevice, which is almost all that is available in this barren habitat. In a charming manner, there is evidence that the mother’s molted fur forms the bedding for the den. A new born snow leopard cub weighs between 320 and 567 grams. They are born blind and well protected with fur. Thereafter the schedule of events can be presented as follows:

In general, as for other large wild cats the cubs are dependent on their mother for a considerable time. And this means that the demands on the mother to hunt and kill prey are doubled when the cubs are at 2-6 months of age. This in turn demands a good local supply of prey. Or in the name of hunting efficiency it can translate to killing farmers’ livestock causing the inevitable human/wild cat conflict to, ultimately, the cat’s detriment.

A danger that is ever present in either small wild cat populations and/or fragmented or “island” populations is inbreeding depression. As the snow leopard lives on mountain ranges divided by massive plains there is the potential for isolation but this seems to be avoided by adventurous males travelling long distances (up to about 600 kilometres) over unsuitable terrain to find their home range.

The video above is part of a wonderful series
and contains sequences of mother with cub.

If you return to Wild Cat Species you can find links to more on this beautiful cat and lots more. More reading:

This page was built using Google Docs. You can see the document here (new window).