The Sphynx cat looked unnatural and rather peculiar, I thought. I also thought that this cat breed was ugly and I couldn’t see the point of the breed. But I discovered that when you meet, touch and interact with this cat you tend to change your mind. This is mainly because of the intelligent character of this cheeky and curious cat. And in any event the Sphynx is actually as natural as any of the cat breeds.

Having had a very close look at this cat at The National Cat Club Show 2007 at Olympia, I was impressed by the Sphynx cat’s character and behavior. This cat can look a bit neurotic. I think this is because of the fragile appearance and of course having no hair (this breed of cat is not fragile, however). Yet the Sphynx cats that I met, touched and photographed were great characters and quite laid back despite the noise, distractions and strangers at the hall. And the little guys I met were new to the showing business. In addition they were robust and strong.

Although this is considered a rare cat breed, my research on common sense principles indicates that the breed is less rare than thought. On a scale of 1-10 where 10 is the most rare I have ranked this breed around 3-4. That said you’ll probably find that there is a waiting list if you go to a breeder. In terms of popularity this breed is probably mid way up the scale. 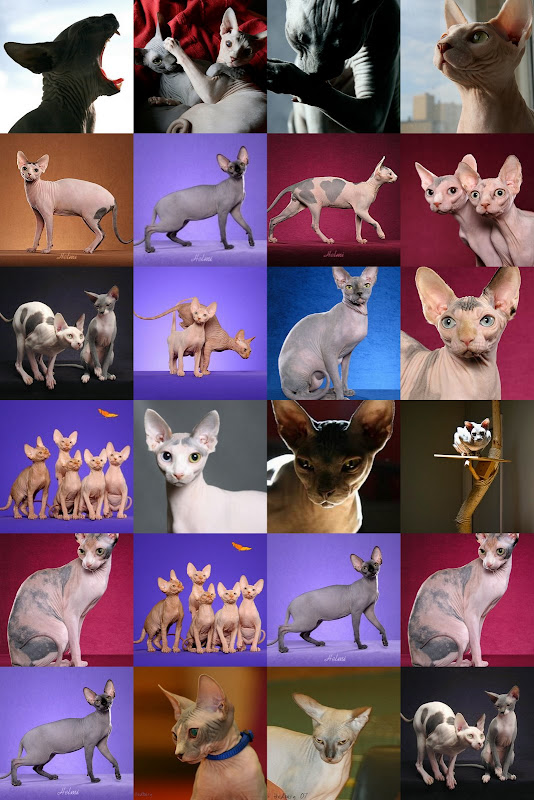 Collage above: The two pictures on the bottom line (centre) are Don Sphynx breed.

This cat breed is one of a group of cats that came about because of a natural and spontaneous genetic mutation of a recessive gene. On this occasion the event took place in Toronto Canada in 1966 (although it seems that this line of Sphynx cats died out due to a failed breeding program, but see below).

The breed is therefore otherwise known as the “Canadian Hairless”, “Moon Cat” and “Moonstone Cat”. There are, though, well documented instances of the hairless cat mutation occurring many times before 1966 without attracting sufficient attention for a new breed to be formed from the mutation. For example, in 1830 in Latin America and in many other countries including England, Australia, USA and Russia, to name a few.

A notable example of another occurrence of this genetic mutation would be the birth of brother and sister “Dick” and “Nellie”, Mexican hairless cats of 1902 (there are, though, recorded instances of hairless cats going back as far as the 1830s). It seems that Dick and Nellie were quite famous. They were given to E J Shinick, Albuquerque, New Mexico by the Pueblo Indians. Mr Shinick did not mate Nellie. While Dick, although a strong healthy cat, was killed by dogs. Dick liked to sneak out of the house despite Mr Shinick’s best efforts and was attacked. Mr Shinick said he would have survived one dog but not a group of dogs. Mr Shinick was aware of the rarity of his cats and their value. They were valued at $1000 (about $20,000 today) each and he valued Nellie at $300 (about $6,000 today).

Another example is the story of a cat named “Nonesuch”. So named as the owner wasn’t sure if the animal was a cat or a dog. The time: mid 1936. The place: USA – Wilmington. The parents were ordinary cats and the occurrence was put down to a recessive genetic mutation. This event sparked a certain Professor Etienne Letard, in France, to write about “Hairless Siamese Kittens And Their Parents” (the “French Bald Cat”). There is also the dominant gene mutation that results in a hairless cat named the Don Sphynx (Russia 1987) and the Hawaiian Hairless (or Kohana Kat). This mutation was noticed in 2002 in Hawaii. The hairlessness is different as there are no hair follicles as opposed to a very small amount of downy hair.

Most of us know that the Sphynx cat is not actually hairless – but just looks that way, at a distance. This cat has very fine downy hair and there are no whiskers and eyebrows or they are small and perhaps broken. They can seem quite slight in appearance but can be largish with a pot belly. In fact the CFA would penalize a cat, of this breed, that looked delicate so this cat needs to look pretty robust. The Sphynx cat falls into the category of a semi-foreign body conformation. The body should have a broad chest and a rounded belly but not a human-type pot belly, please.

The other, perhaps, obvious characteristics (supported by the GCCF breed standard, called the Standard of Points), are the large (very large sometimes) ears, long bony head with high and prominent check bones, large eyes and long wiry looking tail (exaggerated by the fact that it is hairless). Perhaps a number features are exaggerated as they are not covered by fur. The color of the cat is irrelevant to the GCCF. Sphynx cats take on the patterns of their fur through their skin. Determining the color of the fur is difficult (is it irrelevant as there is so little of it?). The hair on the foot pads and around the eyes can help.

The Sphynx seems to have longer limbs or is this just the lack of hair giving and impression? The answer is, yes, as the GCCF breed standard states that the legs and feet are of medium length. They also seem to have longer “fingers” and “toes”, which they use to good effect in holding on to things. As it happens this is, in fact, the case as the GCCF breed standard says the toes should be long and slender (the CFA does not say this). Look at the picture below by dracorubio (Flickr name) and see how the paws are so much like hands and fingers. This cat uses these “fingers” to good effect, being more adept at picking up objects.

They are probably the most intelligent cat breed and therefore require input and interaction from the human keeper or another cat perhaps. They are also agile and strong so something to play with and climb on will probably be welcome. In other words they are active and also vocal.

Want to see GUNNER? He is very handsome + some more on appearance and temperature..Sphynx Cat GUNNER.

It is clearly feasible to breed more varieties of hairless cats but it seems that this is resisted for 3 reasons. First, the gene that makes this cat almost hairless is not a mutation that is naturally beneficial to the cat. Secondly, the breed, in terms of appearance, is not obviously attractive to humans and there are probably health issues if crossing with certain other breeds. Since writing this I have changed my mind a bit about the Sphynx Cat, however (see introduction).

The breed has been crossed with a dwarf cat (the founding dwarf cat) the Munchkin, to produce the Bambino (named after the Italian word for a baby). The Bambino is essentially a short legged Sphynx. There is also the Dwelf, which is a cross between a Munchkin, Sphynx and an American Curl – short, hairless with ears that curl at the tips. More recently a couple of breeders have developed a cat breed they call the “Elf””. Click on the link to read about the Elf Cat, an extremely rare cat. Generally, due to careful breeding the Sphynx is robust with few health or genetic problems.

My research indicates that there are no (not absolutely sure though) health problems associated with this genetic mutation (that produces hairlessness) and that the breeding program has not has health consequences due to close breeding. However, it can be hard to find details about health, for obvious reasons.

The Shynx is a strong cat. It would seem to me that the breeding program has had as an objective the enhancement of the Sphynx like face, which on occasions may (and this is just my personal opinion) have gone too far (compare with the Ultra Persian and Modern Siamese). The author of the Wikipedia entry says that the current Sphynx breed in Europe and America is descended from 2 lines of mutations (a) Dermis and Epidermis (great names) – Pearsons of Wadena MN USA and (b) Bambi, Punkie and Paloma – 1975 Toronto.

Other hairless cats are the Don Sphynx and Peterbald.

In addition to weekly or at least regular bathing as mentioned above, excellent cat care would also include cleaning ears just after the bath. This is, in part, necessary as the ears do not have the usual “ear furnishings” which are functional, preventing dust etc. from entering the ear canal. Obviously this is done with great care and one should only clean what is seen (i.e. obviously don’t prod a Q tip down the ear canal). Although this breed is robust and healthy it is wise to keep your cat indoors for 3 reasons a) they will feel the cold more and like about 70 degrees Fahrenheit (typical indoor temperature) b) as they can get sunburned it is wise to keep them indoors and c) they are rare and may attract undesirable attention.

The Sphynx needs to be washed periodically as the skin (which feels like heated chamois) becomes oily due to the lack of a coat. Gloria Stephens (legacy of the cat) says that the cleaning is to remove dirt from the depressions of the wrinkles. The Sphynx cat is meant to be wrinkly.

Also for people who are allergic to cats but who love cats they may find this breed acceptable (the Siberian cat has some of this quality as well it seems but this would appear to be anecdotal). But allergy to cats is caused by “dander“, a mixture of saliva and skin flakes that are an allergen to some people. As a consequence being hairless does not remove the possibility of the cat producing the allergen. I am sure Sphynx cats groom themselves like any other which means saliva on their skin and fine hair.