Spot was the largest cat my mother and I ever cared for. He just showed up one day in late July 1981. We were preparing for our yearly trip to Myrtle Beach, SC and mama just wasn’t in the mood for a new cat at this time.

But there he was underneath her car in our regular feeding spot. Mama looked so funny as she ran out with the broom to chase that big cat away. Then he’d be right back under the car a few minutes later. We didn’t give the cat much thought until we returned a week later from our trip. 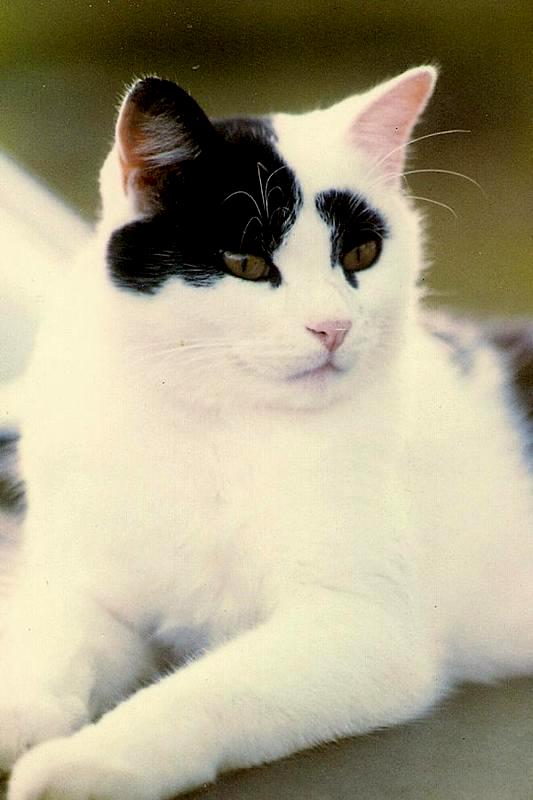 There he was in his usual place. He was black and white and had beautiful gold eyes. We didn’t know whether he had a home or was a stray. This time mama let him stay and he became her first real pet in many years. She said if he wanted to be with us that much she didn’t have the heart to chase him off anymore.

Spot came every day and stayed longer with each visit. He finally moved in permanently and only left the yard to go two houses over to hunt for rats. He slept on the steps or in the bushes. In the winter mama would leave the porch door propped open so he could come inside and stay dry. He continued to grow and I once weighed him at 18 pounds. We still didn’t know how old he was since he was fully grown when he first showed up.

One day Spot didn’t come home after a day of hunting. We both kept going to the door and calling for him. It just wasn’t like him not to come running when we called him. Mama got on the phone and called the neighbor and she hadn’t seen him either. Spot was gone that night and all the next day and night. Mama was almost inconsolable. Then she remembered the old well next door. The place was up for sale and no one lived there but the old well had been covered. Mama called a friend with a ladder and asked him to come over just to be sure Spot hadn’t fallen in.

Spot was sitting on a terra cotta pipe submerged 6 inches in cold water. I don’t know if he was happier to see us or us to see him. He didn’t cause any problems as the man brought him up the ladder. I took him to the vet that day and he was in the beginning stage of pneumonia. He recovered quickly and didn’t stray as much after that. 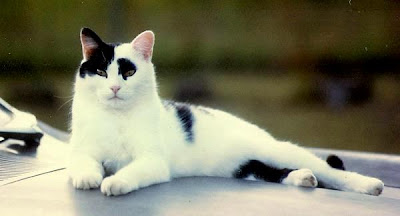 Did I mention Spot was a hero? It was the summer of 1983 and mama and I were sitting in the outdoor swing with my daughter Laura who was 3 months old at the time. Mama had been doing some yard work. Picking up sticks and raking leaves and general landscaping. Mama was really great at growing anything. I began teasing her because there was one stick laying right in the middle of the driveway about 20 feet from us. I remember mama asking where she had missed a stick and I told her “over next to where Spot is sitting.”

THEN THE STICK MOVED! It wasn’t a stick...it was a snake. The only species I’d ever seen on the property was a copperhead and that’s what this one was. Spot was the only thing between the snake and my family. Spot continued to stare at the snake. My husband at the time ran into our home to get his pistol. Spot continued to stare at the snake until it was dead. I think it took my husband three shots because he was so nervous. So Spot was a hero.

Mama kept Spot until 1992 when she had to go into a nursing home for three months of rehabilitation for rheumatoid arthritis. This became a regular occurrence for her. In and out for treatment trying to avoid that final nursing home where she would eventually die with me by her side.

The nursing home meant Spot couldn’t stay with her anymore so I brought him home with me. He had lived through one rat poisoning ordeal several years before and barely recovered so I refused to let him be an outside cat in his new home. He didn’t seem to mind his new living arrangements. He had a bed to sleep in and a lap to catnap on. He had warmth and food and water. Now for the really good part of this story.

I had kept Spot up to date on all of his shots. After the well incident he could never be put into a cage again. I believe the experience left him claustrophobic. It was the last routine to the vet that we got the news. I explained how Spot had just showed up 12 years before and we thought whoever had owned her previously had spayed her because she never had kittens. Yep - you heard right. For 11 vaccinations and countless vet trips for checkups Spot had always been classified as a female on the vet records.

My favorite vet was working on Spot this day and he turned to me and said “This is a castrated male.” We all got a good laugh and a good story out of this cat.

In 1993 mama paid for us to move back behind her. She was in a nursing home and would be returning home in a few weeks. Spot had been losing weight for several months. The vet diagnosed him with old age. We’ll never know how many years he lived but we gave him a good life. He died 3 days after we moved him back home. He died doing his favorite thing - eating a bowl of his favorite sardine smelling cat food. We buried him under the azaleas where he spent his best days with mama.