I believe that I have a York Chocolate. I cannot say with any degree of certainty though, as she is a rescue kitty.

We found her after leaving an outdoor theater in Kansas City called “Starlight”. It was nearly midnight & I barely saw her pouncing toward the road. At first we thought she was a skunk, but as we got closer, saw it was a kitten. After we took her home, we discovered she was covered in fleas! She went for a vet visit the next day. She was 14 oz, and 3-4 weeks old at the time. 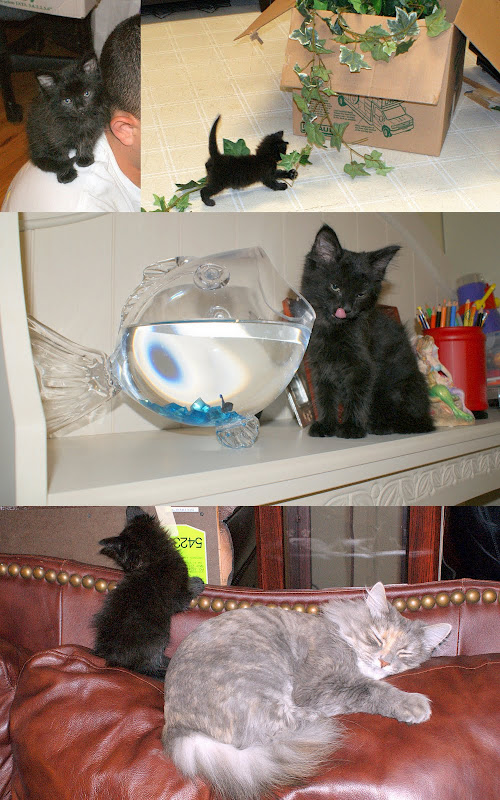 Although we already had a cat and a dog, my husband, who did not really care for cats when we met, fell in love with this kitten that did everything with him.

Starlight, as we named her for both where we found her and what we originally thought to be a black coat, would sleep on his shoulders. If he walked somewhere, it did not phase her!

Now, at a year old, she still is VERY much a people kitty and demands attention. We noticed when we moved to a new house that she was truly more a brown color than black, but she still looks black in most her pictures. I saw a show about Havana Brown cats, and she did have some qualities, but with as rare as those cats are, I didn’t think I had a mixed brown.

Starlight, who is currently curled at the top of my chair around my neck, does not speak much. She NEVER meows, and more chirps or cackles, mainly at birds through the window. She uses her paw to get our attention, and requires belly rubs hourly!

Other unusual things about her are that she lays along the bathtub when we take showers. Afterwards, she jumps into the tub and rolls around in the still wet tub! She enjoys playing chase with us, and is a great hunter…will stalk bugs for hours until she can get them!

Her eyes are a beautiful gold color, and she is a bit on the fluffy side, but very petite. She has medium length hair, very soft, and no undercoat.

I have a British Longhair that we brush, but Starlight does not want to be brushed, and has never developed any tangles. She LOVES to roll around everywhere, so she gets covered in dust, dirt, or whatever is on the ground or floor, but it just falls right off her shiny, silky coat.

I believe she looks very average with the exception of her brown coat which always draws compliments as does her sweet temperament. As much as she enjoys attention, she cannot stand to be held and is NOT a lap kitty. She does like chests if you are laying down though. High perches and investigating EVERYTHING are a must for her!

Anyway, I wanted to share this with you as I have been reading up trying to see what she is, and after much thought believe she is a York Choc. I wanted to share pictures in case she is. If not, she is still the most wonderful, loving, and funny cat!