Here are some stories of tiger hunting from the past; from a time when it was considered “normal” to hunt tigers for the fun of it. They are extracts from books in the public domain and courtesy of Google – thanks Google. I find these stories both fascinating and very disturbing. When looking back we are able to see more clearly. In these hunts people, elephants, the Indian helpers (mahoutes or manhouts) and of course the tigers were hurt or killed. For what?

Hunting of the tiger is no longer legal but it is still hunted or perhaps a better description is poached for body parts. There are still canned hunts of tigers, I understand. These are the hideous, staged hunts where semi captive tigers that are from zoos or breeders are shot for the pleasure of it – quite ridiculous and very sad. 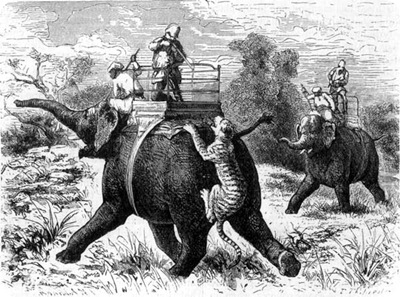 The first of the stories of tiger hunting is from 1830, The Asiatic journal and monthly miscellany, Volume 3, by East India Company

“TIGER HUNTING – Letters from Cawnpore of the 8th inst state that as the collector of this district and another gentleman were hunting a tiger charged suddenly from a jungle one of the elephants on which the animal became alarmed turned and in the hurry to escape fell and precipitated those upon him to the ground. The tiger immediately seized the mahout and broke and lacerated his arm in a frightful manner he was however prevented from doing further mischief by the timely and unexpected arrival of a third party who luckily succeeded in shooting the ferocious animal. The arm of the mahout had to be amputated but he is doing well” – Co John Bull March 20 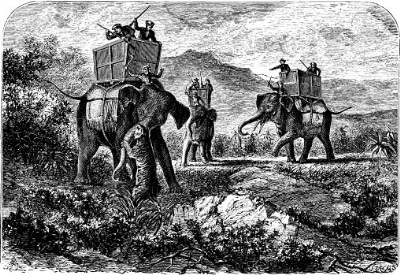 The next of the stories of tiger hunting says it all about those days. It comes from an extract of the Journal of Major Baron Von Oslen of Her Majesty’s 16 th Lancers stationed at Meerut – Tales of Travellers 1838. At this time there were probably over 100,000 tigers. Now it is less than 3,000 as I understand it, with some fragmented populations unsustainable.

“TIGER HUNTING — This day we met with the most brilliant day’s sport perhaps ever recorded in the annals of tiger hunting. We killed four tigers all good fighting ones The first was an old tigress who was killed in the act of charging my elephant. We then went to our tents where a Zemindar informed us that he would show us close by a Patehla jungle where there had been a fierce battle between a tiger and a wild boar all night long.

We immediately went, found the champ de bataille (comment:I think this means the area where the actually killing was to take place) and after beating for some time up jumped three tigers at once. One of them we wounded. We saw him steal away to mother grass jungle towards the forest. We gave chase headed and soon roused him but he sold his life dearly.

The first attack he made was on my elephant whom he pulled down by the hind leg in a very swampy nullah. I had great difficulty in keeping my seat in the howdu (comment:I presume this to be the structure on top of the elephant where the hunters sat) and Bere (comment: a colleague) thought it was all up with me and that I must have been shaken out in the struggle. However I got out of the scrape and after the tiger had been shaken of he made several more charges and fought as long as life was in him.

We then went to look for the two others; soon found and roused one of them who in the most gallant style charged Mr Bere’s elephant several times and was in his turn charged by the elephant. He then came straight at me but I wounded and repulsed him. We saw him make to a patch of very high grass which from the many lairs we found there was evidently the den of the family.

There never was one better chosen. A more awkward and dangerous place to get at I never saw. It was a sort of island encircled on two sides by a very swampy nullah and on the third by a very deep ravine. Few Mahoutes, I believe, would have had the pluck to get over these obstacles with the certainty of being immediately charged nor do I think that in cold blood we would have allowed them to make the experiment.

However in they went and two tigers rushed immediately at Mr Bere. One was fortunately shot by him on the spot but the other got on his elephant’s trunk who tossed him several yards high in the air as a mad bull would toss a bull dog. I thought he must have broken every bone in his body but to my great surprise I saw him as soon as he had got on his legs rush at Berc’s elephant and pull her down by the hind leg. She however soon got up and kicked or shook the tiger off who again retreated to his den. I once more got in, roused him and struck him with several balls but owing to the deep ravine and nullahs he was fenced in with we could not get him out. As a last resource we set fir to the grass which discovered one of the tigers dead.

We called some herdsmen to assist our people in lifting him on spare elephant little thinking that not ten yards off there was another tiger in a patch of grass that the flames had not reached yet.

They did not succeed in loading the dead tiger and had hardly left him when my Mahout accidentally drove through the little remaining grass and a tiger immediately charged my already severely wounded elephant, pulled him down in attempting to cross the ravine and nearly bit his tail off.

After this exploit he again retreated to his den charged whenever an elephant came near him once more boarded B’s elephant and tore off a piece of the pad. The grass he retreated to was now nearly all in flames and at last he was fairly burnt out.

We saw him sitting on his haunches roaring at us when he got his coup de grace. It took us nearly four hours to kill these three tigers and out of the number I have seen killed I never saw their equal. I am sure to be within bounds if I say that they charged in all more than twenty times. One of them had a very deep wound his skin and flesh quite ripped up under his belly which lie must have received in the combat with the wild boar.

On reaching our tents we heard of another tiger had just killed a bullock close to tents, and of three more in direction but both our elephants and Mr B’s mahout, who is clawed in leg, being hors de combat (comment: meaning out of action) we must wait till they are well enough to take the field again as none of the other elephants with us will face a tiger…..”

I might be in the minority, probably am, but I feel very sad for these courageous tigers who fought impossible odds. Tigers are one of the most courageous fighters and able to defeat lions (Lion vs Tiger).

From Stories of Tiger Hunting to Wild Cat Species

Stories of tiger hu nting – the images are presumed to be in the public domain due to the passage of time.